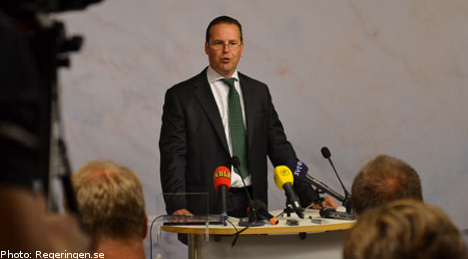 In a hastily arranged press conference to comment on the renewed global financial turmoil, Borg dwelt on the experience gained in previous crises.

“One of my main conclusions from the last financial crisis is that caution pays off,” said Borg.

Borg declined to specify how the current crisis might impact on coming budgets, but warned to expect continued turmoil for the foreseeable future.

“Unfortunately, I think that it will remain turbulent,” he said, repeating comments from Friday when he referred to the “fear and buffalo herd behavior” which takes charge when market fluctuations increase.

He argued that it is “obvious” that countries such as Portugal, Spain, Italy, Greece and Ireland are maintaining public sector deficits which are far too large and underlined the need to address the problem.

Borg meanwhile praised moves by the European Central Bank to demonstrate that it is willing to take an active part in stabilization measures.

“It’s a turbulent situation. We can probably expect that this type of uncertainty will remain until the beginning of the autumn,” said Borg, basing his judgement on Monday’s market reaction..

According to Borg, there is no single measure which would increase stability in the short term, but he thinks that the countries affected by the debt crisis should tell the citizens what taxes they will raise and what spending they will cut.

“It is clear that it would increase the credibility of the countries to specify what they intend to do,” he said.

Anders Borg explained that it was too early to tell how the economic turmoil would affect Swedish growth prospects, but pointed out that Sweden’s flexible currency exchange rate works as a buffer which gives an extra safety margin in the Swedish economy.

Furthermore, Sweden’s state finances are significantly more stable than many other countries, he added.

The Swedish government is currently putting together next year’s state budget. Borg would not go into the election promises that will be met or if there is to be a fifth in-work income tax credit next year.

He assured households however by saying that cutbacks should not be expected.

By 4pm the OMXS index had fallen back 4.5 percent as the Dow Jones opened down and a tangible sense of panic gripped traders.