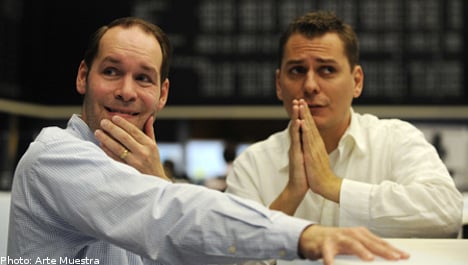 European stock markets fell across the board on Monday and the US Dow Jones closed down 5.5 percent.

Trading in Stockholm fell as expected on Monday in the wake of the credit rating agency Standard & Poor’s downgrading of America’s credit rating late on Friday.

The day was characterised by turbulence with the initial fall of around 2.5 percent on opening rebounding into positive territory for a while while the market struggled to digest the news from the US.

The fall in the OMXS index by 5.2 percent to 281.9 was one of the largets of the European exchanges.

Peter Karlsson, chief analyst at Handelsbanken, explained the drop in the fact that Stockholm has a higher proportion of companies that are sensitive to the economic cycle.

He mentioned Swedish export-oriented companies such as Sandvik, SKF, SSAB and ABB which are all sensitive to a declining world economy.

Clothing chain Hennes & Mauritz was one of the bigger companies that held up best in the stock market free fall. HM’s B shares fell 2.1 percent to 190.50 kronor.

Of the leading European stock markets, the decline was greatest in Frankfurt, which, like Stockholm has many export-oriented and cyclical companies. Frankfurt’s DAX index fell 5.0 percent to 5,923.3, the London Stock Exchange fell 3.4 percent to 5,069.0 and in Paris was down 4.7 percent to 3,125.2.

Political leaders across the globe worked to calm fears with Swedish finance minister Anders Borg assuring households by projecting that no austerity measures will be announced in the upcoming budget.

He meanwhile emphasised the Swedish government’s cautious approach to the crisis, lessons learned from the previous bout of turbulence in 2008.

US president Barack Obama held a speech later on Monday to try to calm the US markets but his words did little to stop traders reaching for the sell button and falls continued unabated throughout the afternoon.