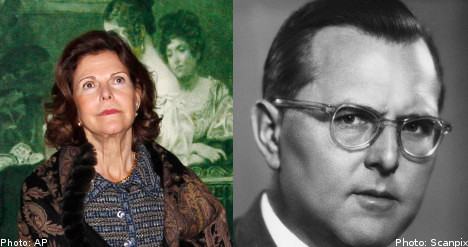 The news has emerged after the conclusion of an investigation into alleged links between the Queen’s father Walter Sommerlath and the Nazis.

Sommerlath reached a settlement with Efim Wechsler to take over his company in Berlin and in exchange handed over a coffee plantation in Brazil.

“I have searched in the Brazilian and German archives and found that my father and Efim Wechsler made an agreement on the factory in Berlin and coffee plantation in Brazil,” Queen Silvia told Göteborgs-Posten.

According to the Queen it was her father’s transfer of the plantation, and three plots in São Paulo in 1939 that made it possible for Wechsler to move to Brazil. Wechsler had already in 1938 been urged by the authorities to leave Germany.

“All of this has come as a complete news both to me and my brothers. Our father never said anything about this time and we kids did not ask either,” the Queen said.

After six months in his new homeland the coffee plantation returned to a relative of Walter Sommerlath’s wife.

Queen Silvia announced in May that she intended to get together with her relatives to investigate reports of her father’s alleged links with Nazism.

The Queen has received assistance in the investigation of a cousin working as a lawyer in Brazil and a former Swedish national archivist.

According to a plethora of reports, Walther Sommerlath, who died in 1990, joined the Nazi party in 1934.

Last year a TV4 documentary series Kalla Fakta (The Cold Facts) reported a widely rumoured story that on his return from Brazil, as part of the so-called Aryanisation of Jewish assets in Germany in 1939, he took over a factory which was owned by a Jew.

Silvia, who has previously made public her desire to be more open with the press reacted angrily to the revelations in the documentary and replied with a private letter of complaint to Jan Scherman, who was general manager of the television channel at the time.

She denied her father was ever politically active or even in the military and Sommerlath continued to deny the allegations and any membership in the Nazi Party up untll his death.

Silva has been criticised widely in the press for not clarifying the stories which have refused to go away, so the news that she wanted to make a full investigation of the links between Germany and Brazil as well as between the Jewish family and her own came as quite a surprise.