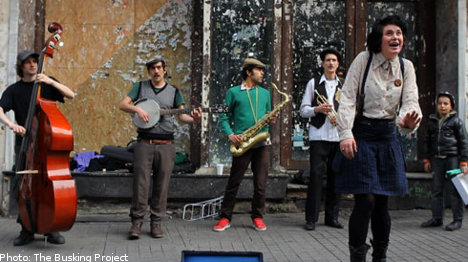 In just under a year the team of three called The Busking Project will be travelling to 40 cities in 30 countries staying for only five days in each place.

Documenting street performers ranging from musicians to jugglers, the team is trying to figure out why people busk and the conflicts that buskers go through.

“A lot of busker’s lives are similar. They’re all subject to the weather, to what the audience like and how much the currency is worth,” says Nick Broad, director of The Busking Project.

Five months into their journey the team has filmed over a hundred performers and stopped off in Sweden for a couple of days to check out the street performer scene in Stockholm.

“There is a lightheartedness to the street scene in Stockholm and there seems to be a lot of potential as well. Audiences in Stockholm seem appreciative and supportive,” says Belle Crawford, artistic director of the team.

The result of the travels will be a documentary, a book and maybe a TV series about the busker scene.

The team explains that so far they’ve discovered that being a busker isn’t always an easy life. Street performers are often victims of negative stereotypes and busking is seen as begging in a lot of countries.

“Some people are begging with an instrument to make them look better but there is a lot of amazing art out there that people are bringing to the streets as a free medium just for people to enjoy it,” says Chris Smith, project manager.

“I guess that’s what we’re exploring. We’re looking at all these different levels of busking, the motivation and the conflicts that they go through.”

The idea for the project came to Nick Broad over dinner with a fiend.

“I was living in New York when I was cut from my job and I was thinking about what to do. I design websites, I’m a writer and I like filming buskers and this was a way of combining all three,” says Broad.

The project is financed mostly by online fundraising but also by personal money.

“I had to sell my car and move back to my dad at the age of 30 to fund the trip,” says Belle Crawford.

On their journey the team will be flying as little as possible and will travel by boat and train instead to save money and to be eco-conscious.

They will also not be staying at hotels but instead they will be sleeping on people’s sofas in the countries they visit, engaging in what has become known as couch-surfing.

“It’s amazing. It’s made it a lot easier cause these people are often locals and they know the cities and the people and they’ve been a fantastic resource helping us.”

Travelling the world in the easiest way possible, sleeping on sofas and spending most of their time working outdoors the team feel they can now relate to the jugglers and musicians they’ve met.

“I guess you could say that on this journey we’re actually living our lives like the buskers we’re documenting,” says Crawford.