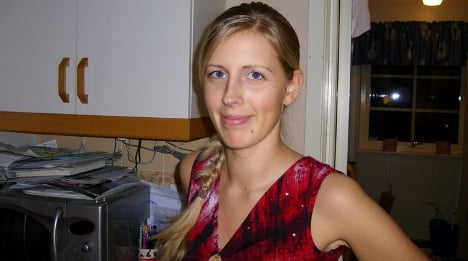 Jenny has now been missing for over a week and despite a slew of tip-offs, police are nowhere closer to discovering the circumstances surrounding her disappearance.

“We can’t confirm that a crime has been committed but we can’t find a natural explanation,” said information officer Lars-Håkan Lindholm to The Local on Thursday.

The police have received several tip-offs but nothing that has led them any closer to discovering Jenny’s whereabouts. At the same time they are less inclined to comment on the case, stating that the ongoing investigation requires restraint.

On Wednesday it became clear that apart from some text messages in July, neither family nor friends had seen Jenny since May.

According to the boyfriend, Jenny left the flat they shared in central Malmö around 9am on August 1st. When leaving, she said she was going “to work”, the boyfriend told police.

“There are definitely some peculiarities surrounding this case,” said Lindholm.

According to Lindholm, Jenny had told all her friends and family, including the boyfriend, that she was working at the local hospital.

But Jenny hadn’t worked at the hospital since August last year.

“It is like being struck in the face to know that she lied to us,” said her mother Anita Persson to Kvällsposten.

The family had noticed a change in Jenny over the course of the spring.

“When we met her around her birthday she wasn’t looking good and she had withdrawn during the year,” said the mother to the paper.

The boyfriend also confirmed to the paper that Jenny hadn’t been herself lately.

“She could sit for hours and just stare out the window. I asked her what was wrong but all she’d answer was that she needed some time to herself,” he told Kvällsposten.

According to the police they have received information about the change in Jenny and are investigating where she could have been going when family thought she was at work.

“It certainly looks like she was leading some sort of double life,” Lindholm told The Local.

When she hadn’t returned to the flat by August 2nd, she was reported missing by her boyfriend. Since then the police have been looking for clues as to what could have befallen her, but so far they haven’t come up with anything.

However, one of Jenny’s neighbours told Kvällsposten that they had spoken only the week before her disappearance.

“I saw her the last week of July. I met her and her boyfriend outside our house and we talked about our dogs,” the neighbour said to Kvällsposten.

The police confirms that they have received information of someone seeing Jenny between May and August but won’t disclose how trustworthy these are.

The police are now following up leads and trying to find out from Jenny’s mobile phone, from her computer and bank statements what she could have been doing during the days.

According to Lindholm the case is treated with the highest priority and the police have now filed an international missing persons report.