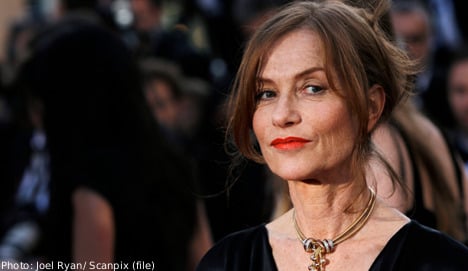 “Fearlessness and contemplation are the opposing poles in the space where her characters are created and exist,” festival organisers said.

Huppert, 58, is perhaps best known for her part in Michael Haneke’s “The Piano Teacher”, where she played a sexually repressed piano instructor, a role for which she won Best Actress in Cannes 2001.

According to festival organisers, Huppert will be in Stockholm in November to receive the prestigious award.

“She is the muse to the greatest of film auteurs, and at the same time, her own incomparable auteur.”

Since “The Lacemaker” in 1977 by Swiss director Claude Goretta, she has

taken on many “memorable” roles, the festival jury added.

She was described on Friday by festival organisers as “one of the most diverse and intrepid film personalities ever.”

The Stockholm film festival, which was created in 1990, is an annual event which runs November 9-20.

The Bronze Horse is awarded every year and has previously gone to Roman Polanski, Lauren Bacall, David Lynch, Charlotte Rampling and Wong Kar Wai, among others.