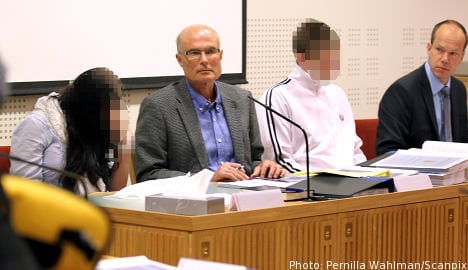 The three suspects had visited a pizzeria in Hofors on April 3rd where they ran into Tommy Johansson, who had been one of the young woman’s favourite teachers in high school.

When the trio left the restaurant, the woman told her two male friends that Johansson had groped her and touched her breasts. Her boyfriend reacted violently, and found out where the teacher lived.

On Monday, the 20-year-old man charged with the murder of Johansson was sentenced by Gävle district court to nine years in prison.

His girlfriend got three years for aggravated assault and manslaughter and the friend who assisted in the deed was sentenced to eight months for complicity to the crime.

The court stated in their ruling that the 20-year-od perpetrator must have intended to kill the teacher or at least have been indifferent to the fact that the victim might die from the assault.

The court also said that there were no mitigating circumstances to the crime and that the 20-year-old was therefore sentenced with murder.

The defendant has admitted to the assault but has been adamant when questioned that he thought the victim would survive.

But the court did not believe his story.

“We think that due to the extent of the violence, and the prolonged time during which it took place, points to the fact that the man had a direct intent to kill his victim, but we have chosen to leave it at saying that he must have been aware that he could,” said judge Anita Wallin Wiberg to news agency TT.

According to the 20-year-old’s defense lawyer he intends to appeal the verdict.

“The defense does not share the court’s assessment that it has been proved that my client is guilty of all the violence that the prosecution claims,” said defense lawyer Gustaf Andersson.

The other two assailants have in their statements claimed that the 20-year-old repeatedly jumped on the victim’s head, something he has denied.

“I jumped on his chest, not from up high, it was more to make my point. I did that twice,” he said during the trial.

The 21-year-old girlfriend was charged with murder and an alternative charge of being an accomplice to murder but was ultimately sentenced to aggravated assault and manslaughter.

It is the court’s opinion that she did not want the teacher to die but that she has contributed to his death through her actions.

“Among other things she tried to stop the 20-year-old and attempted to call an ambulance. But she still took part in the deed and has acted carelessly,” said Wallin Wiberg.

As the three defendants were all under 21 at the time of the murder, their sentences are shorter than if they would have been older.

It was Johansson’s daughter who found him beaten to death in the hallway of his house.