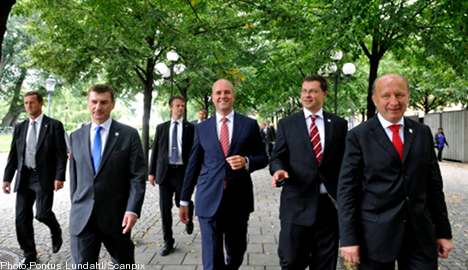 During a ceremony in Stockholm attended by the prime ministers of Estonia, Lithuania and Latvia, Reinfeldt spoke of “a dark moment” in his country’s

the Baltic countries” in 1944, he said at a celebration marking the 20th anniversary of the three countries’ independence.

In 1945, Stockholm extradited to the Soviet Union around 170 soldiers from the Baltic countries who had fled the Red Army and found refuge in Sweden.

“The extradition of the Balts is a dark moment in Swedish foreign policy,” Reinfeldt said.

He said that Sweden had long ignored its Baltic neighbours and urged for post-independence relations to continue strengthening.

“For decades, Sweden did not acknowledge Baltic suffering,” the conservative prime minister said.

“I hold in my hand a Swedish school book used during the 1980s. It makes no mention at all of the destiny of Estonia, Latvia and Lithuania after the Second World War. Not one word,” Reinfeldt said.

“In fact, it is hard to find any reference to the fact that there had ever

been any Baltic countries. This was the reality when I went to school,” the 46-year-old leader said.

“Sweden has a debt of honour to the people of Estonia, Latvia and Lithuania. We owe it to ourselves – and we owe it to the Baltic peoples -to remember the past, but also to build a common future,” he added.

Latvia’s Valdis Dombrovskis, Lithuania’s Andrius Kubilius and Estonia’s Andrus Ansip thanked Sweden for the assistance it has given their states since independence.

Reinfeldt’s speech drew mixed reactions among Balts in the crowd.

“It’s easy for him to say that today because his party was not in power at the time,” Lehte Slunge, who fled Estonia with her parents in 1944, told AFP.

Jaan Seim, the head of the Estonian school in Stockholm, argued that “realpolitik was what was guiding the Swedish authorities at the time.”

“It was a small country that wanted to be neutral and had a huge neighbour to the east that posed a huge threat.”

“I was more disappointed by the fact that, in the 1970s and 1980s, Baltic nations simply no longer existed in the Swedish psyche. For them it was the Soviet Union and nothing more,” said Seim, a Swedish-born Estonian.

known as the “Monday meetings” were held in 1990 and 1991 to support the Baltics’ efforts to regain independence.

The three states organised a human chain in 1989 in which two million people joined hands, linking the Baltic capitals, against Soviet rule.