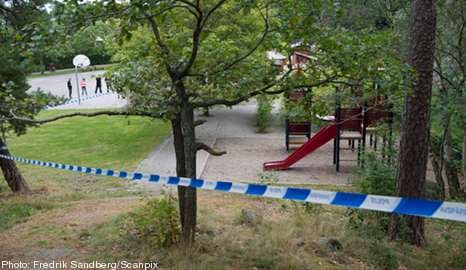 “When I saw the pipe I immediately thought of the kids playing nearby. I told them to move. I didn’t want to start a panic but I am fairly confident there may be more. I find it hard to believe there would only be three,” said the woman to daily Aftonbladet.

The woman spotted the suspected object and became suspicious due to the green tape wrapped around it – something that police had warned about in local media.

She alerted the authorities who came immediately and cordoned off a large area around the playground. Technicians are investigating the scene.

On Monday evening, bomb technicians detonated a charge the size of a tennis ball and wrapped in green tape found hanging from a football goal at a local recreational ground.

On the football field police discovered spread bits of green tape, indicating that something else had previously been exploded there.

Since Monday night police have been carrying out a search of the surrounding area carefully for any further hidden charges, and are issuing a warning to the public not to touch any objects wrapped in green tape.

The police said earlier on Tuesday that the teenager,remanded into custody by police on Monday on suspicion of the pre-school explosion, may be behind several other neighbourhood blasts, according to police.

“We have questioned him but we can’t disclose too much of what he has said. We are now working on questioning people around him and gather information about the other explosions,” said Ville Paloheimo of the local police to daily Dagens Nyheter (DN).

The object behind the explosion at Solbacken preschool was a powerful homemade firecracker, reported the police on Friday.

A four year-old girl injured her hands in the blast, and was taken to the hospital, where she was operated upon for several hours.

According to police reports, it is believed that she will make a complete recovery.

“The girl found the cracker inside the preschool’s area. It exploded in her hand,” said the Stockholm police force’s Lennart Löfgren to newspaper Dagens Nyheter at the time.

The firecracker was lodged in the gutter of a shed in the preschool’s yard, near the sand box where she was playing. When the girl pulled on the cracker, she heard a hissing noise before it exploded.

From the information police have gathered since the blast they confirmed on Monday that they had enough to question the teenager further.

The technicians searching his house discovered materials that could be used to make explosive charges, and indicate a connection to the pre-school explosion, said the police on Monday afternoon.

Police believe that there have been several other blasts around the area with the same type of home made fire crackers found in the playground.

The teenager is suspected to be behind these as well.

The teenager, who is reportedly very young and previously known to the police, is now facing charges of attempted murder or alternatively aggravated assault.

Police are at present unwilling to divulge whether he has admitted to placing the charges in the area.