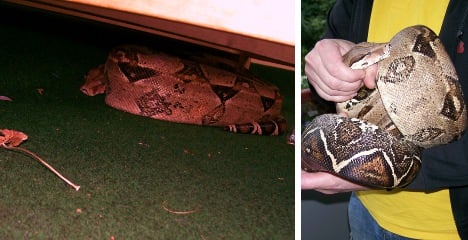 “I looked down and saw something I didn’t recognise, and I realised it was a snake,” 65-year-old Ingrid Wassberg told The Local.

Wassberg, who resides in Karlstad in central Sweden, was watching television when she noticed it had started to rain.

“I thought I’d better go outside and save the seat cushions from getting wet,” she said.

But soon after she stepped foot on her balcony, Wassberg noticed the unfamiliar animal curled up underneath a table, prompting her to rush back inside.

“I ran indoors at first and peeked at it from inside,” she said.

“Then I went out carefully again a few times to make sure that it really was, in fact, a snake.”

Anticipating that the boa might leave at any time, Wassberg nevertheless mustered up enough courage to snap a few pictures as proof for the police, which she called within minutes of stumbling across the sizeable serpent.

Shortly thereafter, four police officers arrived at Wassberg’s apartment to assess the situation and stand guard for the next two hours while they waited for an animal expert to arrive.

The handler then removed the boa from Wassberg’s flat and transported it to a local pet store where it is currently being held until the owner can be identified.

Though representatives from building management company Karlstads Bostads AB have been knocking on doors in the neighborhood, the owners of the reptile have yet to be found.

“I keep my balcony windows open at night, but I don’t think the snake came from below,” said Wassberg.

“I live on the second floor, so I believe it may have come in from another apartment on the same floor.”

According to Wassberg, nothing of the sort has happened to friends or neighbours of hers in the past, and she doesn’t know anyone that owns a boa constrictor.

“I don’t really like snakes, so it was a relief when it was taken away, but I checked for more snakes here just in case,” she said.

“I’ve gone around and looked and have not seen any, so it’s a bit of a mystery.”