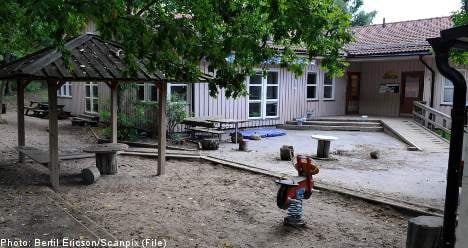 “We have a few indications that this may well be the case,” said Sven-Olof Karlsson of the local police to daily Aftonbladet on Wednesday.

The boy was brought in for questioning on Monday after the blast at a pre school in the Stockholm district of Sköndal seriously injured a four-year-old girl.

Since then, two more charges have been found in the area.

On Monday, police detonated a homemade charge after it had been discovered hanging from a goal on a football field.

On Tuesday a third charge was found near a playground, only metres away from playing children.

After the second bomb had been found police issued a warning that the public should beware unidentified objects wrapped in green tape and report any new discoveries immediately.

Police said on Wednesday that it is not unlikely that the teenager currently being questioned had one or more accomplices.

“There are some indications that that may be the case but considering the young age of the boy and his friends I don’t want to say more about it at present,” said Karlsson to the paper.