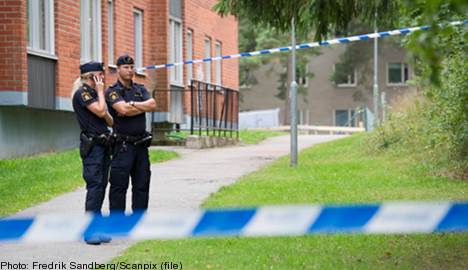 A warrant for the 18-year-old’s arrest was issued in his absence on Wednesday. He is suspected of aggravated assault.

“The man was arrested on Thursday morning in one of Stockholm’s southern suburbs. We have so far only had a preliminary talk with him, ” said Ulf Göranzon, press officer at the Stockholm county police station to news agency TT.

On Thursday the 15-year-old boy arrested on suspicion of last week’s explosion was remanded into custody on the charge of aggravated assault.

The court ruled that it was likely the boy would continue with criminal activities and endangering the investigation if he was released. He will stay in custody until September 1st.

The proceedings were conducted behind closed doors. Before press were ushered out of the hall the boy denied the allegations.

He was not present in the hall during the proceedings but sat in an adjoining room.

“He is in bad shape,” explained defense lawyer Fredrik Zettergren.

According to Zettergren it is very trying for the boy to be locked up.

The boy was brought in for questioning on Monday after the blast at a pre-school in the Stockholm district of Sköndal seriously injured a four-year-old girl.

Since then, two more explosive devices have been found in the area.

On Monday, police detonated a homemade charge after it had been discovered hanging from a goal on a football field.

On Tuesday a third device was found near a playground, only metres away from playing children.

After the second bomb had been found police issued a warning that the public should beware unidentified objects wrapped in green tape and report any new discoveries immediately.