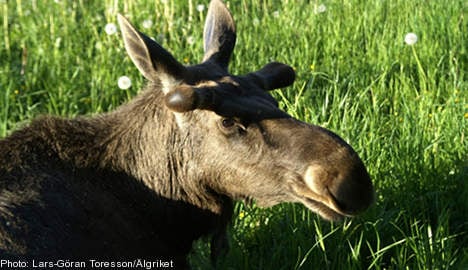 The elk were “too small” was the simple sentiment of the disappointed Danes.

The family sent a complaint by email to the municipality’s tourist office and received most of their money back, much to the resentment of park owner Lars-Göran Toresson.

“I’m not happy that I was not included in the exchange, if anyone was to compensate the tourists it should have been me for not having informed them properly, but it should not have come to that,” Toresson told The Local.

The bull elk and the park’s main attraction, Elliot, died last year in a tragic accident and Toresson bought a new bull, Elliot 2, which is on the path to eminence but has not yet fully grown.

Tingsryd’s tourist agency subsequently paid the family 200 of the 290 kronor ($30 of $45) they had spent at the park, as compensation for his perceived substandard visit.

“We have given him some money back as a goodwill gesture. It is always sad when a guest is not satisfied with their experience,” Karin Nilsson, tourism coordinator at Tingsryd told The Local.

However, Nilsson does not agree that the tourist office gave the family incorrect information.

Although the family was disappointed by the information offered in the tourist brochure, which was supplied by the office, it was never guaranteed exactly what animals were housed in the park, she said.

“We told him that it was unfortunate if the concept of ‘king of the forest’ as stated on our website had given him the wrong expectations for the visit. ‘King of the forest’ is an expression used to describe elk in general and a male animal in particular,“ said Nilsson.

“The fact that we have a young ‘king’ is in fact a tragedy, as the old ‘king’ died in an accident. That we currently only have two smaller animals wasn’t planned. These things happen,” Toresson said to The Local.

Toresson has not printed new brochures nor updated the website with information that the animals are not fully grown, though he told The Local that he always tries his best to inform all visitors of what to expect.

“Ninety-nine percent of visitors are notified about exactly what is in the park. But at times there are caravans to be parked properly and queues to get to, so someone entering might be lost in the shuffle and go through the park without being informed,” he said.

Next year Toresson plans on purchasing an additional elk, and meanwhile hopes that the resident female gives birth to a calf, he said.

“What I can also do to prevent this happening again in the future is make sure everyone has the right expectations going in; my aim will be to not allow one single person to enter the park without being properly informed,” he explained to The Local.