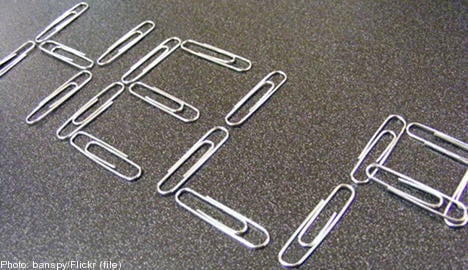 The new survey shows that one in three Swedish employees have, on at least one occasion, felt worried to be shown to be less competent than they really are.

And a higher level of education augments this concern.

“Perhaps the saying is true: the more you learn, the more you realise how little you know,” the Manpower Work Life study found.

“The fact is that the higher level of education you get, the bigger the chances are that you will suffer from concerns about being a fraud. The tendency is very clear.”

Employees with primary education (grundskola) were less likely to harbour this worry with 13 percent claiming to be occasionally concerned they’d be exposed as being less competent than believed at work.

Those most worried to be found to know less than they should are employees in marketing, advertising and PR, where 53 percent said that they have at least on one occasion felt like a fraud at work.

“Generally speaking, one can say that creative, knowledge-intensive fields are most often affected by feelings of being a fraud,” read the study results.

They are closely followed by the research and development sector at 51 percent, as well as media and IT professionals at 47 and 43 percent respectively.

According to the study it is creative and knowledge-based occupations that are most likely to be worried they are less competent than they should.

Within practical occupations such as industry and transport (17 percent) or in the service sector (23 percent) it is less likely that employees worry over being exposed as a fraud.

The study also showed that 40 percent of those with a university education would have chosen a different specialisation if they were given a chance to choose again.

Women are in majority among those that would choose a different major with 45 percent to the men’s 37.

At the same time, 71 percent of the participants stated that they were happy with their choice – despite the fact that they might have changed their mind if they could make a new choice today.