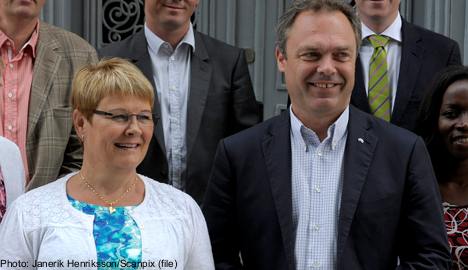 Maud Olofsson of the Centre Party and Jan Björklund of the Liberals.

“That we would join forces with the Moderates in a government coalition would be inconceivable, but I see possibility for collaboration between us and the Centre or the Liberals,” said Carin Jämtin, Social Democratic party secretary to daily Expressen.

She can also see a closer cooperation between the Social Democrats and all other government parties except the Sweden Democrats.

Spokespeople for the Greens, Åsa Romson and Gustav Fridolin, wrote in a opinion piece on Saturday that the party will open up for closer collaboration with the centre-right government parties within three areas; infrastructure, housing and education.

“The Greens will never be a fifth alliance party but a constructive opposition is always ready to find ways to seek broad agreements where that is possible and necessary,” they wrote in DN.

Prime minister Fredrik Reinfeldt on Saturday commented on closer collaboration within and over block borders.

“Our first task is to come together within the alliance government. Then I welcome anyone who wants closer cooperation in Sweden, provided they make clear their intentions,” Reinfeldt said during a press conference prior to his summer speech on Saturday.

On Friday Expressen presented figures showing that six in ten Social Democrat MPs across the country were against a continued cooperation between their party, the Left Party and the Greens.

Only 18 percent of the 1,000 MPs asked were in favour of a continued red-green coalition in the election 2012.