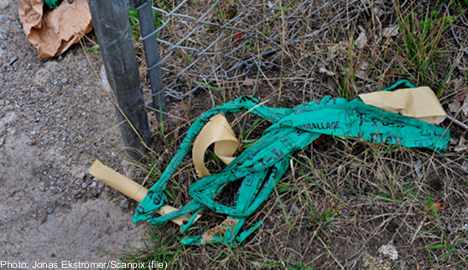 “We had a call in the morning when a passer-by had observed a small green object on the side of the road,” said police on Sunday.

Although they weren’t sure about the nature of the find at first, the bomb technicians who arrived at the scene thought it best to have the object removed for further investigation.

To their surprise the mysterious object turned out to be a pen, wrapped in layer upon layer of green tape.

According to police, bomb technicians must treat any suspected find as if it is a danger until the opposite has been proved.

A forensic investigation will determine if the tape is the same as used to wrap around the explosive devices previously found in the area.

Two weeks ago a first explosive device was found when a 4-year-old girl was seriously injured following a discovery of a homemade device in the guttering in the preschool playground.

A few days later the police made two more discoveries where homemade bombs were found on a football field and near a playground.

Two boys, 15 and 18 have so far been remanded into custody, believed to be behind both the pre-school blast and the later discovered devices.