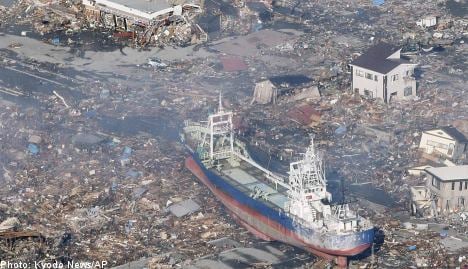 “The local community design in crucial” when it comes to responding to the consequences of tsunamis, Yoshiyuki Kawazoe, an industrial science professor

at Tokyo University, told a seminar at the World Water Week conference in Stockholm.

On March 11th this year, as large swaths of northeastern Japan were being

devastated by giant earthquakes and tsunamis, the village of Yoshihama was

spared, suffering not a single death, largely thanks to local urban planning,

In Yoshihama, “the residence areas were built outside of flooding areas.

The local land use planning made it so that no one was living behind the tide embankment,” Kawazoe explained, pointing out that people there had decided

“they could accept damages to the rice fields but not to the residence areas”.

Lessons should be learned from Yoshiyuki, he said, insisting “we need to rethink engineering after this specific disaster”.

It should be “up to the local communities to decide how big future tide embankments have to be built,” he said, pointing out that “the higher an embankment is the more expensive it is”, so it should be “a question for the

Makoto Taniguchi, a scientist at the Research Institute for Humanity and Nature (RIHN) in Kyoto, also stressed the importance of involving the local community in tsunami preparedness.

At a national level, “we need to better share and learn from the local knowledge and experiences”, he told the Stockholm conference.

“preventing tsunamis requires huge investments which is not economically and

It is therefore important to “know the historical and cultural contexts and practices of livelihood in local communities and consider future options available with the communities,” the study said, stressing that “society and households need to have a capacity to rebuild livelihood as quickly as possible”.

Japan, located at the junction of four tectonic plates, experiences 20 percent of the strongest quakes recorded on Earth each year.

On March 11th, a 9.0-magnitude earthquake set off a giant tsunami, leaving more than 20,000 people dead or missing and creating the world’s worst nuclear disaster in 25 years at the Fukushima plant.