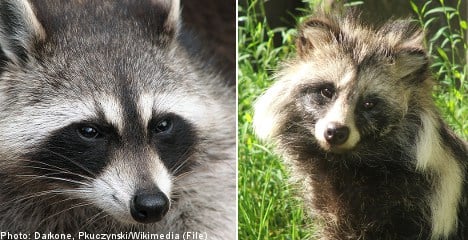 Game wardens are concerned that the invasive species’ rapid expansion in neighbouring Denmark may soon cause them to brave the waters of Öresund, and swim over to Skåne, reported Sveriges Radio (SR).

The water separating Sweden from Denmark isn’t enough to protect the former from the invasion.

“They’re good swimmers. And besides, they could also use the bridge as a possible crossing. But neither the open sea nor high waves are going to scare them off, Bertil Nilsson, wildlife officer at Skåne’s County Administrative Board (Länsstyrelsen), said to SR on Tuesday.

Rabies, tape worm and destruction of wetlands wildlife are some of the threats associated with the otherwise rather cute raccoon dog.

“In Finland the large wetlands areas are all but emptied of ground-nesting birds and frogs,” said Nilsson, pointing out that over 100,000 raccoon dogs are shot in the neighbouring country every year.

Cameras have been in place along the Swedish-Finnish border for some time now, and have now been installed by Öresund as well, to monitor the threat from the west.

The newly installed cameras have made a surprising revelation: when searching for raccoon dogs, large numbers of raccoons were also discovered.

Raccoons are not indigenous to northern Europe, but are considered an invasive species after the four raccoons set free by Herman Göring in 1930’s Germany proliferated into the country’s current figure of over one million animals.

The invasive species has now clearly established itself in Denmark too, meaning that Sweden is but a brief swim away.

“We’ve seen from other places that the raccoon is happiest in cities, where food is plentiful. They’re happy to rummage through garbage cans, so it has a big chance of surviving here,” said Nilsson.

“There’s nothing wrong with the species. We just don’t want them here,” said Nilsson to SR.