“McDonald’s in collaboration with 1,000 Swedish farmers,” concludes the commercial, which was produced by ad agency DDB.

It now turns out that the commercial was actually filmed in the Czech Republic, as the Swedish landscape didn’t work, reports Swedish magazine Land’s supplement Lantbruk och Skogland.

“We recorded the film during the winter, and Sweden was covered in snow. We wanted to show a spring landscape, and that wasn’t possible to film in Sweden.”

“Obviously we would’ve preferred to record it here, but it simply wasn’t an option. We had to record it this winter, in order to get it finished in time, so we didn’t really have another option.”

According to Berg, the important thing is the commercial’s message:

“We’ve received a lot of positive feedback and comments for raising awareness and showing the importance of Swedish agriculture.”

The tractor-driving farmer appearing in the commercial seems to be the only real Swedish element. He is reported to be a Swedish milk farmer. 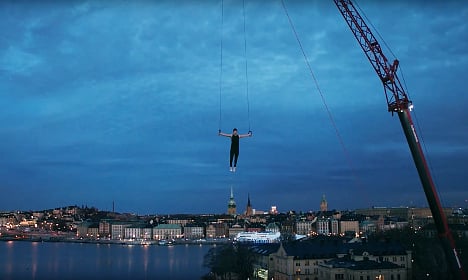 But one of the drawbacks of doing an ad shoot at sunrise in a freezing cold April is that the wardrobe decisions are somebody else’s.

“I had to wear a tank top and gymnastics outfit, and then get up into the rings,” the stuntman tells The Local.

“The first thing that hit me was how windy it was up there and I thought, damn, it’s really cold, but then I got into the moment and focused on what I was supposed to do.”

Lindqvist was a perfect pick for the job when Arla dairies wanted an actor for a video that's part of an ad campaign to tie in with the Olympics this summer. The 29-year-old has represented Sweden in gymnastics and can perform the difficult Iron Cross move on a set of rings.

But hanging from a crane 50 metres in the air was a new experience.

“I work with stunts and am used to heights but still it was a very nice view up there, seeing Gröna Lund and Slussen,” he said referring to two famous Stockholm landmarks.

The film crew used a drone to get to get the desired shots and Lindqvist was delighted with the end result.

“I love drone pictures and the last picture is the one I like the most.”

Much as he enjoyed the experience, Lindquist says he hopes in ten years time that he’ll be working as a stunt coordinator and that it won’t be him having to shiver in a tank top at sunrise.

“We had snow the next day so I’m actually quite happy we got it all done.”