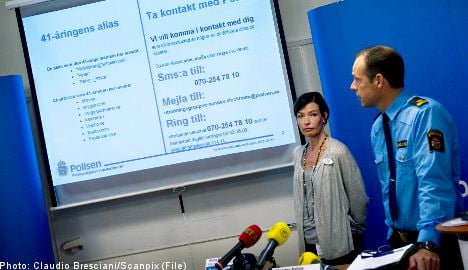 Police believe he has been active for years and, having combed through files on the man’s computer, believe he has used a number of aliases on different internet chat forums and social media websites such as MSN, Facebook, snyggast.se, and kamrat.se.

“Aside from one case, the girls haven’t filed the reports themselves, but have been found through his computer,” prosecutor Markus Hellsten said at a press conference on Thursday.

Based on the material found on the 41-year-old’s computer, police have been able to identify 14 young girls, but have yet to confirm the identity of an additional 35 victims.

With few exceptions, the victims are young girls, aged 7 to 18-years-old.

Investigators now hope to get in touch with more victims by sending emails to addresses found in chats where the 41-year-old has been an active participant.

So far, investigators have identified 800 addresses in the man’s computer.

In consultation with child and youth psychiatrists, police plan to get in touch with suspected victims, provide information about the man, and request they contact police.

Children and their families have been urged to contact police if they suspect they may have been contacted by the man.

“Though a few interviews we’ve realised that this is a hard subject for children to talk about,” said Hellsten.

The 41-year-old, who resides in the Stockholm area, has previously been convicted of assault and molestation. He is also suspected in several rapes and for child grooming.