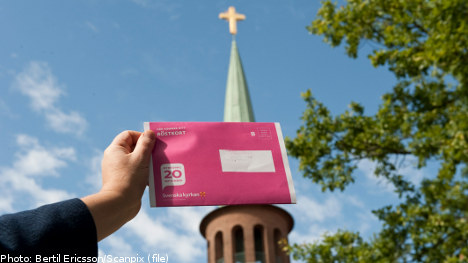 “This is a step taken with respect both to the many conservatives who have a religious commitment and the decision to separate church and state,” the Moderate Party wrote in a statement on Friday.

While the party executive has taken a formal decision, the party underlines that “it is very important that those who wish to continue to represent moderate ideas in the church’s work are enabled to do so”.

This sentiment is supported by party secretary Sofia Arkelsten.

“The Moderate (party) is not standing in the national church elections, but moderates can!” Arkelsten wrote in a Twitter post on Friday.

The party’s church consultation group has been given the task of developing a new platform for its commitment to the Church of Sweden, while underlining that there is no longer a religious association within the party.

Elections to General Synod of the Church of Sweden take place every four years and the next elections are due in 2013. Since the 1930s “nominating groups” have typically been directly affiliated with national political parties.

The Moderates are the first major party to take the step for secular reasons, although the Left and Green parties have long operated a system where members are free to form separate associations to compete in the elections.

Furthermore there are also groups with roots in the so-called Free Churches which generally encompasses candidates from the Liberal and Christian Democrat parties.

All Church of Sweden members aged above 16-years-old are eligible to vote for nominating groups and direct elections are held to national national (Kyrkomötet), Diocese (Stift), Community (Samfällighet) and Parish (Församling) assemblies.

Until 2000 the church was considered a state church but on January 1st of that year this relationship was changed with a formal separation of church and state.

With over 6.6 million baptised members, the Church of Sweden is the largest Lutheran church in the world.