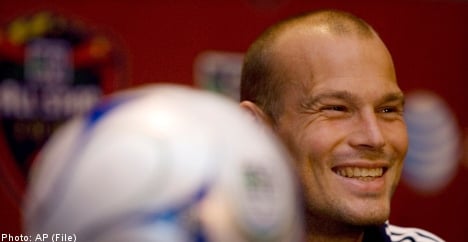 The former Sweden international, who had been released after a stint at Celtic in Glasgow, has agreed to a deal which will cover this current season and the next, according to several media reports.

“I am really looking forward to playing in Japan,” Ljungberg told ESPN.

“I was inspired by how the Japanese people handled the earthquake tragedy of March 11 and now I want to show my support by playing football in Japan and for S-Pulse.”

Ljungberg, who has now plied his trade in England, most notably at Arsenal, the USA and Scotland, as well as in Sweden, had been linked with a move to Sven Göran Eriksson’s Leicester, but instead chose to take on the challenge of the Japanese top flight.

The move will most likely be the last big contract for the 34-year-old, who had a frustrating stay at Celtic where he struggled to win a regular first team place.

The Scottish giants decided not to take out the option of an extra year on Ljungberg’s deal, so he has been looking for a new club during the current football transfer window.

Shimizu S-Pulse, who are based near Mount Fuji are one of the top teams in the Japanese league.