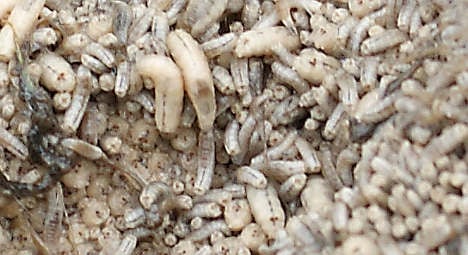 The two residents, referred to in local media as Eva and Birger, first noticed a pungent smell three weeks ago and every morning Eva started finding maggots by her bed which backed onto the neighbours wall.

She and her husband, as well as the neighbour Birger then discovered more maggots on their balconies.

After closer inspection, Eva discovered. to her horror that her bed and the skirting boards in the bedroom were infested. Despite efforts to solve the problem though, worse was to follow.

”In the mornings when I woke up there were maggots on the floor and the flies everywhere. The maggots crawled away when it is light and come back in the dark,” Eva told the local Sundsvall Tidning newspaper.

When Eva alerted housing management company HSB she was told to simply vacuum the maggots up. However the problem and the smell refused to go away, so the environmental authorities were called to deal with it.

Even they couldn’t put a stop to the smell though, until finally the cause of the problem was traced to the apartment next door where the dead body was discovered.

However that wasn’t the end of the couple’s problems. They were forced to throw out both the bed and the vacuum cleaner, which are worth some 15,000 kronor ($2,400) according to Eva.

HSB told them that the insurance on the building did not cover personal property, so they were not eligible for any kind of reimbursement, while the couple’s own insurers Folksam also refused to pay out, apparently because pests and insects are not covered under their policy.

However, Folksam did in the end agree to a 2,000 kronor payout because the couple had made no previous claims.