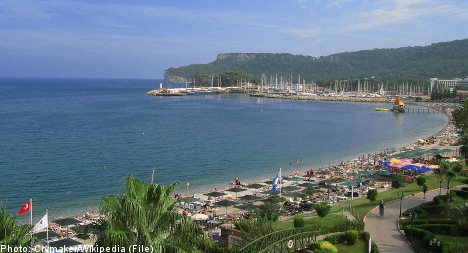 A file image of Kemer bay and marina

Some 15 people were injured in the blast which disturbed the peace of the resort of Kemer explosion in the Mediterranean resort of Kemer in southern Turkey on Sunday morning, according to several media reports.

Among the injured were four Swedes.

“We can confirm that four Swedes have received minor injuries,” confirmed Pia Roed at the foreign ministry’s press office.

The cause of the explosion has not been established but it is thought that it was due to a gas hose from a hotel to a soda machine on the beach that exploded, according to the Dagens Nyheter daily.

The four Swedes affected by the blast travelled to Turkey with the Turkietresor tour agency.

According to the agency’s CEO Marie Andersson, the four were near the explosion on the beach.

“We sent them to the local hospital immediately, with one couple discharged immediately. One of the people in the other couple complained of pain in the ear passage, because there was a loud explosion, and so we transported them to a larger hospital with specialist care inside the region’s capital city of Antalya.”

Andersson told news agency TT that she has not received any conclusive reports on the nature of the explosion.

“But we do not believe that there was a bomb, the explosion was instead on a smaller scale.”

CRIME
Gangs in Sweden: How often are explosives used?
Url copied to clipboard!