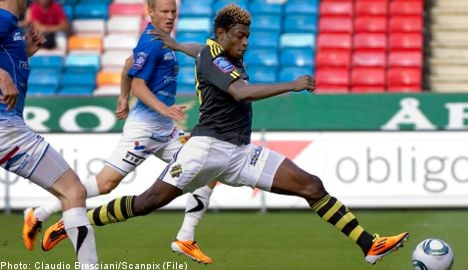 Sierra Leone striker Bangura has moved to Celtic on a four-year deal from AIK Stockholm.

And now the 22-year-old Bangura has followed in Larsson’s footsteps by joining Celtic.

“It is very flattering to be recommended by Henrik Larsson, and it’s a very good feeling,” Bangura told Celtic’s website on Tuesday.

“I know all about Henrik and what a great player he was for Celtic, and I’m looking forward to joining up with my new team-mates and working hard to do well at Celtic and help the club be successful.

“But I don’t feel any pressure.

“I am delighted to be joining a club the size of Celtic.”

“I’ve played in Europe for a while now so I feel ready.

“I’m here to play, so I will fight for a starting place.”

Following the recent departure from AIK of Teteh Bangura to Bursaspor in Turkey, Mohamed Bangura’s move to Celtic will make it difficult for the Stockholm club, currently in third place in Sweden’s top professional league, the Allsvenskan, to recapture the league title they last won in 2009.

But AIK’s sports director Jens Anderssson admitted the club is more concerned about the future.

“To replace the Allsvenskan’s two best would cost as much as we sold them for and even so there is no guarantee that we’d get the same quality. So we’re not going to make some sort of desperate attempt to fill the holes now. Instead we’re thinking ahead to 2012,” he told the TT news agency.

Bangura is Celtic’s fifth signing of a transfer window that closes on Wednesday, following the arrivals of Adam Matthews, Kelvin Wilson and Victor Wanyama and the loan deal for Fraser Forster.

He will join his new team-mates after the international break, when he is expected to play for Sierra Leone against South Africa.

Celtic manager Neil Lennon said: “We believe Mohamed is a player of real quality and someone who has the potential to make a big contribution to Celtic.

“He comes highly recommended by people in the Swedish game. We have had him watched for a year or so, and all the reports have been very positive, and I know Mohamed is excited about joining the club.

“He’s a young player and someone with great enthusiasm for Celtic and for the challenge ahead, and we’re really looking forward to welcoming him to the squad.”