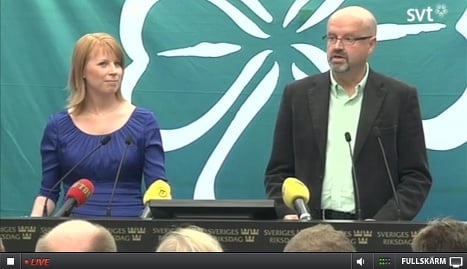 Lööf, currently the Centre Party’s economic policy spokesperson, was the overwhelming favourite among the party’s rank and file to succeed Olofsson, who has led the party for the last decade.

Support for Lööf was very strong, with 169 of 200 party voting districts supporting her as their top choice. Challenger Anna-Karin Hatt, current minister for IT and regional affairs, received support from 26 districts, while the third candidate, MP Anders Jonsson, had the backing of five.

“I’m incredibly proud to be the nomination committee’s choice and see it as a privilege to be able to continue working with Anders W Johansson and Anna-Karin Hatt,” Lööf told reporters at a Wednesday morning press conference.

Lööf vowed to not take the party toward either the right or the left.

“We will develop pointed, modern proposals which appeal to the entire country,” she said.

The nominating committee was unanimous, according to chair Stefan Tornberg, who had difficulty seeing any further conflict around the party leadership post.

“The strong support for Annie Lööf reveals a unique ability to build up a broad trust across the Centre-movement. Especially praised were her communication talents, her keen leadership, and feel at home in traditional populist arenas as well as in new meeting places in our society,” said Tornberg.

The Centre Party’s new leader will be officially voted in during the party’s conference, scheduled to be held September 22-25 in the mountain resort town of Åre in northern Sweden.

The 28-year-old Lööf hails from Värnamo in south central Sweden and joined the Centre Party in 2001. She was elected to the Riksdag in 2006 by preference vote and was the youngest MP to serve during the 2006-2010 parliamentary term.

She sits on the Riksdag finance and defence committees and is deputy leader of the Centre Party’s Riksdag group.