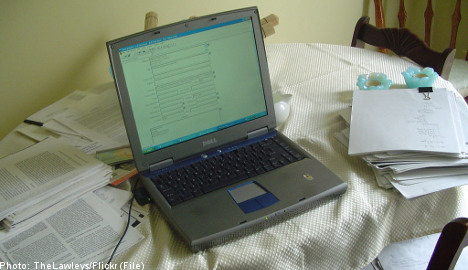 The fact that the Swedish government has waded into the debate on the rising problem of cheating at the country’s higher education establishments shows just how serious the situation has become and the determination of the authorities to stop it, despite a feeling in some quarters that it will always be a losing battle.

A series of recent investigations reveals a growing problem which is showing few signs of abating, and, with technology getting ever more accessible, it seems more students than ever are prepared to take the risk of getting caught.

“It is is clearly becoming more widespread, which is why the government has tasked us with looking into ways of treating the problems,” Christian Sjöstrand, a lawyer at the National Agency for Higher Education (Högskoleverket), tells The Local.

He says that the growing awareness of the problem has spurred all sides into action.

“At the moment though, it is still up to each individual school or university how they deal with it. We are currently in the process of collating all the information to see how we can be of help and support.”

The number of students suspended from Sweden’s colleges and universities went up by nearly 50 percent in 2010 compared to the year before, with a total of 506 students forced to leave Sweden’s 26 largest institutions of higher education last year, according to a review of statistics by the TT news agency.

In the wake of the latest findings, education minister Jan Björklund suggested that Swedish college and universities need to tighten up their approach to cheating and review the penalties handed out to those caught.

All sides seem to agree on two things. Technology is a major contributor on both sides of the debate, and the problem is getting worse, especially in the case of plagiarism.

Of the 750 students who were caught last year, 591 were suspended and 159 were given warnings and of that number, plagiarism accounted for 343 of the suspensions.

Pontus Kyrk, who put the report together for the National Agency for Higher Education, says the problem should not however, be blown out of proportion.

”Although the numbers have risen, it is still a very small percentage of the student population. There are certainly many more ways of uncovering this kind of activity and we are busy looking into it,” he explains

With government having taken notice, however, questions are also being asked about whether the current system does enough to deter students from being dishonest.

Kyrk added that he personally feels that the current punishments are not harsh enough and are really no deterrent at all.

Currently each university or college has a disciplinary board with the mandate to warn or in severe cases suspend students caught cheating.

Suspensions can be up to six months long and can mean the students miss out on taking exams. They are also forced to forgo any grants they may have received for the term of the suspension.

Like many others, Sjöstrand sees the internet and technology as both a cause and a cure to the problem.

”Of course the internet is a major problem in that people have such more access to texts. But on the other hand it can be a help to those looking to stop it too, as it gives us the same access and the capability to compare texts and uncover cheating,” he explains.

Keeping up with the latest technology is key to the clampdown at many universities.

Authorities at Stockholm University say they are using a sophisticated software system to check all material handed in for exams, while at other schools, stringent checks are in place to catch wrongdoers.

Such cheating-detection software is increasingly being seen as the authorities’ best weapon.

Another institution taking a tough stance is Södertörn University in Stockholm, which is one of many looking into introducing a mandatory use of web tools to track cheating and plagiarism.

”The students belong to a generation that learned how to retrieve information from the internet and we need to talk more with them about where the line is between borrowing an idea and copying it,” Södertörn head Moira von Wright recently told TT.

The Aftonbladet newspaper recently published a report highlighting which Swedish universities seemed to be doing the best to keep academic dishonesty in check, with Gothenburg University and the Swedish University of Agricultural Sciences (SLU) topping the list.

”We try to keep updated and aware of what kind of research and actions others are taking, as we know there are many initiatives in other schools that are worth following,” says SLU lawyer Lennart Jonsson.

“We try to regularly inform our students about the rules regarding cheating and plagiarism so they are continually aware that we are looking at it.”

However, like others, Jonsson concedes that statistics do not always provide all the answers.

“It is hard to explain why we are so high, but we have always performed well in these lists,” he admits.

“There are many reasons, from the students themselves, our measures to stop it and also how each individual teacher and school reports the issues when they arise. Sweden is certainly not the only country experiencing such a situation though.”

Meanwhile the next official report on cheating at Swedish universities is set to be released at the end of September, giving students and educators alike a new chance to reflect on whether the Sweden has managed to bring the problem under control.