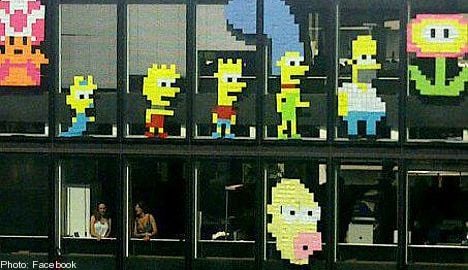 “We are going to think of even cooler characters and we are considering aiming them out towards Vasagatan and Klarabergsgatan,” said Bo Isaksson from an IT company located near the government buildings in Stockholm to the TT news agency.

Isaksson launched the creative project in Sweden last week. He had read a blog about the French Post-it war, which had started when employees created a picture out of post-it notes in the office window.

Isaksson liked the idea and when he had fifteen minutes to spare he made a pink Space Invader character to be displayed in the window.

“Then someone across the street responded. That was unexpected,” he said.

After that the competition was on and everyone in the office could give in suggestions as to what should be created next. The company’s stock of Post-it notes in different colours was looked over.

Isaksson think that the game has brought both joy and energy to the workplace.

According to his boss Mattias Hällström, the game may take some of the employees’ time away from other tasks but at the same time it makes up for it by creating a social togetherness that ultimately will increase commitment and productivity.