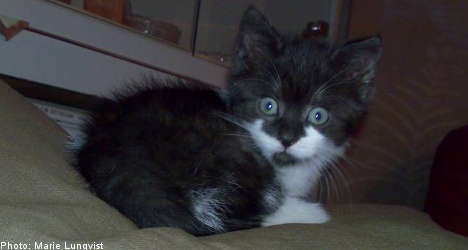 While driving she had heard unusual sounds from the inside of the car and arriving at her home in Söderbärke, in central Sweden, she suspected there may have been an animal hiding somewhere in the vehicle’s body.

But after an extended but fruitless search, which even involved removing the wheels of the car, Karlsson decided to take the car to her autoshop some 30 kilometres away.

“I drove really carefully and I felt I had no choice,” Karlsson told the Aftonbladet newspaper.

Upon arrival, the mechanics struggled to remove the wheels and loosen the car’s gas tank.

There they found the curled up, dirty little kitten clinging to the tank.

“But it sat there safe and protected in a corner behind the gas tank,” said Karlsson.

The mechanics quickly removed the terrified animal and fed it some milk after which it appeared to calm down.

Despite several car journeys totaling an estimated 70 kilometres, the month-old kitten was found to be completely unharmed and Karlsson subsequently found it a home with one of her colleagues.

“She was a little shaky and scared the first day,” the cat’s new owner, Marie Lundqvist told The Local.

“But now the little rascal is very lively,” she said.

Lundqvist is now taking suggestions at work to give the young cat a proper name, and at the moment she’s leaning towards Kajsa Kavat, the name of a character from a popular children’s book by renowned Swedish children’s author Astrid Lindgren about a plucky orphan girl who grows up under the care of an elderly lady.

“It was quite plucky to get through this ordeal,” said Lundqvist.