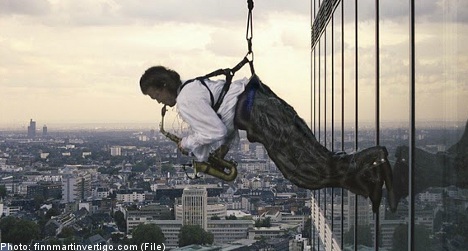 Finn Martin in a 'Vertigo' performance in Paris

The man, Finn Martin, was supposed to use a rope to help him vertically slide down the façade of a building while playing a saxophone before dozens of cheering fans late Friday evening.

But during the attempt, the harness apparently broke and Martin plunged to his death before the shocked audience.

A doctor quickly determined that the 49-year-old performer had died from the impact.

Police said they were investigating the incident under the assumption that safety devices had failed and were also looking into whether participants had been under the influence of alcohol.

The performer was scheduled to do his 15-minute act four times while video images were displayed onto the building façade.

“He was a world-class artist, one of the top-ten saxophone players in the world, but almost unknown in Sweden,” Martin’s cousin Peter Martin, told the Aftonbladet newspaper.

Finn Martin had carried out similar dare-devil performances, which he called ‘Vertigo’, many times in recent years.

In 2005 he played on the façade of a tower in Cologne that was nearly 150 metres tall.

On his website, Martin referred to Vertigo as “an unusually emotional music aerial performance”.

While he was born in Sweden, Martin has lived abroad for most of his career.

According to his cousin, Martin’s dare-devil performances were used to help him finance musical projects in West Africa.

“Finn had a passion for African music,” his cousin Peter Martin told Aftonbladet.

“His art was his life and he was an artist and musician from every pore of his body.”