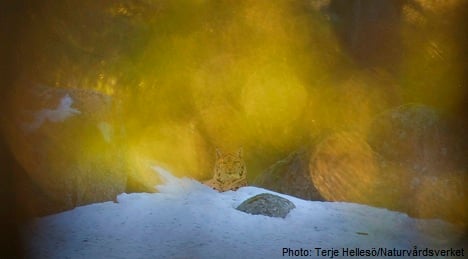 The controversy arose when wildlife care consultant and blogger for the Swedish Association for Hunting and Wildlife Management (Svenska Jägareförbundet), Gunnar Glöersen, received a call from a journalist asking him to examine a suspicious looking picture of a lynx.

“Doesn’t this lynx in the July greenery have a winter furr? How about the lynx that’s reflected in the pool, is it walking in the air or on land, and can you really see the paws in that angle?”, Glöersen wrote in a blog post dated August 26th.

Glöersen also questioned the authenticity of the picture, and decided to examine more of Hellesö’s work.

Based on his wildlife expertise, he began to suspect that Hellesö’s alleged accomplishments were simply too good to be true.

Among Hellesö’s claims called into question by Glöersen are reports that the nature photographer had seen 150 lynx in nine months, when Glöersen himself had only seen 15 in 52 years.

Glöersen also questioned Hellesö’s claim to have photographed a raccoon dog from a meter away, in an area where they’re not even supposed to exist.

In a debate between Glöersen and Hellesö on Sveriges Radio (SR) on August 30th, Hellesö at first denied the allegations that he had doctored his images.

“No no no, of course not. Not under any circumstances,” he said.

However, four days later, on September 3rd, he changed admitted the forgeries to his wife.

“I didn’t know about this myself. I’m still in shock,” Malin Hellesö told SR.

“Not all the pictures are manipulated, just a few of the lynx pictures.”

On Monday, Tommy Berglund, an inspector and wildlife tracker at the County Administrative Board of Västra Götaland, reported Hellesö to the police for fraud.

While he filed the report as a private citizen, rather than as a part of his official duties, Berglund is nevertheless concerned about the affect Hellesö’s claims have meant for local wildlife management efforts

“Tons of resources have been used in vain to find wildcats and raccoon dogs that don’t exist.”

Because of the time and money they’ve spent, and the fact that numerous concerned people have called the Administrative Board, Berglund thinks this is an important issue, and certainly a matter for the police.

Hellesö, who was born in Norway but moved to Sweden in 1987, was named Nature Photographer of the Year by the Swedish Environmental Protection Agency (Naturvårdsverket) in 2010.

While the agency hasn’t made any final decisions in the wake of the photo-doctoring scandal, officials are now reviewing if he will be allowed to retain his title.