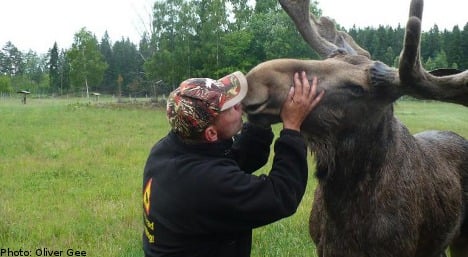 Gårdsjö Älgpark lies just outside Heby, 100km north-west of Stockholm and the 16 hectare slice of Swedish wilderness plays host to a growing family of elk and thus feels able to offer visitors an elk guarantee.

The park is the brainchild of Leif Lindh, or self-styled "Leffe the Moose Man", and is the result of his devotion to raising the elk in their natural habitat, albeit an accessible and public-friendly version.

He takes great pride in the fact that these "Kings of the Forest" not only trust and follow him, but are comfortable enough to eat from his hand, be petted by visitors, and even bathe with him in a nearby lake if the weather is right.

“As far as I know I’m the only person in the world who swims with elks,” Lindh says with a grin, although when The Local dropped by, the water is a little too cold to see him in action.

While the business is now booming, with 130,000 visitors finding their way to Gårdsjö in 2010, the novel approach to accessible wildlife management wasn't an immediate success.

“People thought I was crazy when I told them about my dream to start an elk safari. My friends, my family – they all said I was mad," he explains.

When no-one turned up on the opening day in 2007, "Leffe" began to wonder whether the doubters were right.

“I was strong willed and a little stubborn. And I love these majestic creatures. I was sure people from around the world would enjoy seeing them as close-up as I do. Luckily they did.”

On the safari itself, Lindh drives a tractor with tailor-made trailer loads of camera-ready tourists attached, and provides a rather eccentric running commentary.

We are driven out into the fields, and soon come to a stop when a shout from the crowd turns everyone's attention toward an elk-shaped figure looming among the birch trees.

Gunde, the alpha male, emerges from the forest on the crest of a hill, seemingly posing for the cameras while surveying our group.

He has the enormous, fur-covered antlers of a four-year old, used to assert his impressive dominance among his family and the spectators alike.

Lindh coaxes him down towards the crowd with soothing words and a bucket of pellets, and slowly leads him all the way around the group, stopping regularly for photos and petting.

Indeed, during the safari, the entire group of elk fans has ample opportunity to touch and pet the animals, which remain calm in the presence of the visitors.

“It’s quite alright to touch their horns too,” offers Lindh.

“Try it – you can feel the blood pulsing through. Just like warm kiwi fruits, no?”

Gradually, more and more inquisitive elks emerge from the forest, drawn by the gentle calls of Leffe – the pied piper of this secluded elk kingdom.

The crowd delights in the latest additions to the 14 strong family, twins Lady and Luffsen (Lady and The Tramp) who are only 7 weeks old.

Lindh runs tours three times a day, Tuesday to Sunday, giving eager elk fans information in a quickfire, humour-filled round in both Swedish and English.

He even claims to be teaching the elk English so they can respond to the wide variety of visitors they receive from around the world.

Last year alone, people from 120 different countries made the trip to Heby to see the moose man at work and somewhat ironically, Lindh believes his ever-growing guest book may be due to Sweden's decreasing elk population.

“There are only 250,000 in Sweden right now, and only 10-12 countries in the world have them in the wild. Some people go to Africa to see elephants, some come to Europe to see elk. I’ve just made that easier to achieve,” he says.

Lindh's relationship with these usually wary and unpredictable creatures has been honed by employing a rather unorthodox up close and personal approach.

“I come out into the woods and sleep between the calves and their mother for the first few days of their lives. They get used to my voice, my smell," he explains.

"Over the next three weeks, we spend 15 hours a day with them. At the end of it, when I leave the woods, even my own wife doesn't recognise me – but at least the elks do!”

As "Leffe" Lindh puckers up and plants a kiss on Holge, the mother elk, it might be a safe bet to assume that no man has such a close understanding of these majestic beasts.

“She even kisses better than my wife,” he jokes. “Nobody tell her, though!”