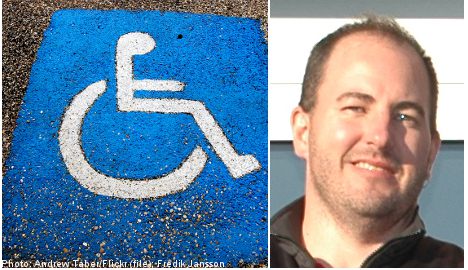 “It is ridiculous to say the least. It defies all common sense,” Jansson told The Local.

Eleven years ago, Jansson was forced to have his leg amputated after a long battle with cancer.

Despite the fact that it is unlikely his condition will get better, he regularly has to prove to local authorities that he has enough trouble walking to need a disabled parking permit.

“I go down to Umeå once every three years and have a doctor establish my leg is still gone,“ he said.

According to Jansson the trip makes him lose a day’s wages as well as using up a medical appointment someone else might have been more in need of.

But according to the local authorities, the medical certificate is necessary in order to establish who needs a permit and who can manage without, as there are a limited number of disabled parking spaces in the area.

“It is really difficult for us to judge these things and that is why we need the medical recommendation,“ said traffic administrator Annica Persson from Skellefteå municipality to The Local.

She also pointed out that there are very many prosthetic aids for those lacking limbs today, which also makes it difficult for laymen to know who can manage without a permit and who can’t.

For Jansson, however, a prosthetic leg is not an option.

But even if it was, he doesn’t think he would manage without a disabled parking permit if he was trying to carry shopping bags, manage crutches, and forced to walk some distance to his car.

But according to Persson the authorities are not allowed to take carrying groceries into consideration.

“We are only allowed to make our judgement from the person’s ability to walk,” she said.

However, Persson also said that it is in fact possible for the authorities to make an exception from the rule and use the same medical note twice, provided the certificate has enough information in it.

She also said that using it more than two times would probably not be possible, or the certificate would be considered outdated.

“But even so, the actual application for the permit still has to be handed in every three years,“ Persson said.

Jansson understands that it is not in fact Persson and the local authority that make up the rules, but he still thinks that it is ridiculous that the permit has to be renewed so often.

“It’s not like my leg is going to grow back,” he told The Local.