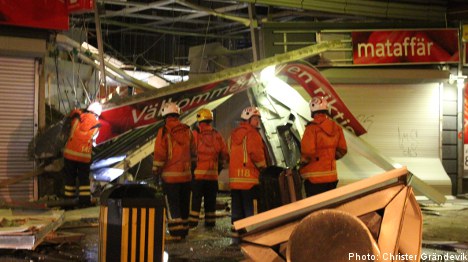 “A wheel loader has been driven straight through the entrance and a cash machine has been torn out of the wall. As it looks right now, the thieves have made away with the safe behind it,” said Johan Ljung of the local police to news agency TT.

The incident, which also caused a major water leak, occurred around 2.20am on Friday morning.

Shortly thereafter a police patrol noticed a speeding Renault heading towards Gothenburg. The car was later found abandoned about 25 kilometres from the crime scene.

“In the car we found an angle grinder which the offenders probably used to remove the case for the ATM”, said Thomas Fuxborg, spokesperson for the Västra Götaland police to Aftonbladet newspaper.

The area was searched with a K9 patrol without any results, and it is still unclear how much money was in the safe.

Police is now investigating the car and possible surveillance material that might be of use. They’re also looking for witnesses to the crime.

There are still no suspects, but police expect the number of offenders to be at least 2-4, according to Fuxborg.

A similar heist occurred just before midnight on Wednesday when masked thieves used a wheel loader as a battering ram to rob electronics giant Mediamarkt in Skövde, some 150 kilometres from Gothenburg.

And earlier this summer someone tried to pull out a cash machine in Gothenburg the same way, but without success.