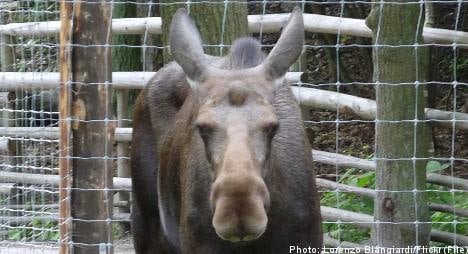 “Suddenly the elk stopped and looked right at me. Then it came after me,” hunter Per Henrik Berggren, 31, told The Local.

Berggren was part of a 15-strong hunting team that had taken to the forests near Skellefteå in northern Sweden on Saturday in search of the so-called king of the forest.

Shortly after the group started the day’s hunt, word came over the group’s radio from Berggren’s hunting companion Niklas Forsell, 22, that an injured elk calf was in the area.

“Niklas called out that there was an injured calf heading toward me,” said Berggren.

Berggren was unarmed at the time, serving as part of the group attempting to flush out the elk so that other members of the group armed with rifles could take aim at the beast.

Suddenly, the animal rushed past Berggren.

“I ran with him for about 200 metres, which was only possible because it was injured,” he said.

However, it didn’t take long before Berggren found himself eye-to-eye with the elk, who quickly went on the offensive.

“It came at me and kicked me down to the ground,” he said.

“I realised things could end badly, that it could just trample me to death.”

As he and the elk wrestled with one another, Berggren reached for his hunting knife and succeeded in delivering a blow to the attacking elk’s neck.

“Then I called to Niklas for help and he came and managed to finish him off,” said Berggren, who described the minutes-long encounter as “extremely unpleasant”.

Despite his potentially deadly-brush with the beast, Berggren doesn’t hold a grudge against the aggressive animal.

“He felt trapped and was stressed. I have full understanding for why he acted the way he did. His natural self-defence instincts kicked in,” said the hunter.

“Of course, my self-defence instincts kicked in as well. But the whole point was to try to end the elk’s suffering as quickly as possible.”

While Saturday’s hunt left Berggren shaken, he nevertheless expects to be out hunting elk again soon.

“I’m still in a state of shock from the whole thing, but I don’t think it will be any problem to go out again,” he said.