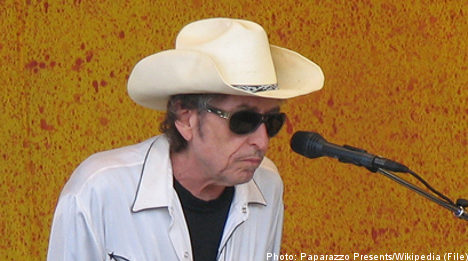 It was around 11pm one evening in June 2011 when the 50-year-old would be troubadour stood outside his ex-girlfriend’s balcony, guitar in hand, the Metro newspaper reported.

The love-sick man had also cobbled together a group of five other men to serve as vocal accompaniment for the late-night live performance, each of whom donned hoodies with their hoods up.

But soon after the man began to serenade his ex, who had previously taken out a restraining order against him, she called the police, leaving 50-year-old guitarist blowin in the wind.

According to the woman, she perceived the sidewalk concert as threatening, even if, at the time, the man was only standing near the doorway.

“I had the idea that I’d play a Bob Dylan song for her. I thought I was doing something nice,” the man reportedly told police during a subsequent interrogation, although it remains unclear which song he had in mind.

According to the ex-girlfriend, she and Dylan-wannabe had a court date scheduled for the day after the mid-evening musical interlude.

She also claimed the man had threatened her new boyfriend in connection with the incident.

When police arrived on the scene, the 50-year-old had no time to think and quickly ran and hid in the bushes, an escape attempt he later described to police as “tedious”.

On Monday, the man was indicted in the Gothenburg District Court on suspicions of harassment and making illegal threats.

While the 50-year-old man denies having committed any crime, it remains unclear if he wishes he’d thought twice before thinking it was alright to try to win back his ex.