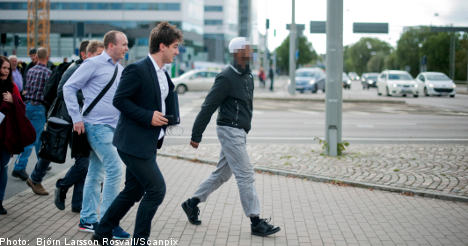 Suspicions against the men were downgraded on Tuesday from preparing terror crimes to preparing to commit murder.

However, 24-year-old Mohamed Adel Kulan was released due to a lack of sufficient evidence to keep him in custody.

In all likelihood, however, the remand orders will be appealed.

“My assessment is that the prosecutor’s reasons are very vague. My client has denied committing any crimes and is therefore somewhat surprised over the court’s decision,” Mahamood’s defence attorney, Urban Gilborne, told the TT news agency.

Both Gilbone and the attorney representing Aziz Mahamud, Ulf Ahstedt, describe their clients as calm and collected.

The lawyers are also highly critical of the secrecy surrounding the case.

“It’s strange, I’ve lodged a protect against all this hush-hush and we still have a gag order,” said Ahlstedt.

He believes that the defence’s arguments are being given less weight than those of the prosecution, led by vice prosecutor Agneta Hilding Qvarnström.

“She is sitting on everything and can take certain steps while I can’t say anything,” said Ahlstedt.

“But all of this about the gag order and secrecy, is it really appropriate and is this how it was thought to be?”

Eva Henriksson, who represents 25-year-old Abdi Weli Mohamud, said she plans to appeal the remand order, arguing that the evidence is very thin.

“It’s easy to be placed in remand in Sweden, that’s my conclusion,” she said following the hearing.

“What has been presented today is possibly a fineable offence. When the four were arrested by the national task force the suspicions were preparing terror crimes. In the remand petition to Gothenburg District Court, however, it’s classified as preparation to commit murder.”

The four men have been held since Sunday after they were apprehended by an elite counter-terrorism unit and police.

Hundreds of people were also evacuated from the Röda Sten art exhibition hall after officials concluded that “there was a threat that could endanger lives or health or cause serious damage”.

Qvarnström remained tight-lipped at the conclusion of Wednesday’s remand hearings, which occurred one after another and altogether lasted seven hours.

She refused to answer questions about whether Swedish artist Lars Vilks, who has received death threats from al-Shabaab for depicting the Prophet Mohammed as a dog, was the intended target of the murder plot.

“I’m not going to comment on who the object of the murder plan was,” she told TT.

Vilks had posted on a blog that he would attend the Gothenburg art fair being held at the Röda Sten cultural centre, but without specifying when, local newspapers reported.

He has faced numerous death threats and a suspected assassination plot since his drawing was first published by a Swedish regional newspaper in 2007, illustrating an editorial on the importance of freedom of expression.

Qvarnström was also asked whether the case involved a plot that could have had a detrimental impact on society at large or whether it was involved something aimed toward an individual.

“We had certain indications at the start and therefore we had the [preparation of terror crimes] classification. But a few days have passed and we’ve had the opportunity to find out more and the classification has been downgraded, even if preparation to commit murder is still a serious crime,” she said.

“Terror crimes like this presuppose that the act will hurt the Swedish state and it was hard, when he had so little information, to show that.”

Qvarnström also refused to say when more light will be shed on the investigation, which has come in for criticism due to its high level of secrecy.

“As long as the preliminary investigation is ongoing, it will remain confidential,” she said.