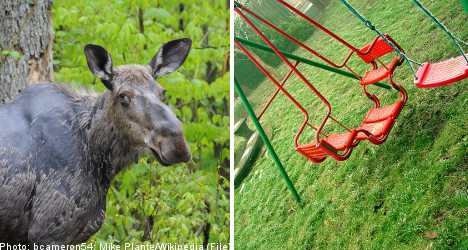 A homeowner from Storebro in northern Kalmar County arrived home on Wednesday night to find his garden littered with bits of apple and other signs that an elk had been partying in his back yard, the local Östran and Barometern newspapers reported.

The concerned homeowner also discovered that the children’s swing set which normally sat in the yard was missing.

The man immediately called police, who contacted a local hunter to track down the inebriated elk who was thought to possibly be injured.

Drunken elk are common in Sweden during the autumn season when fermenting apples are plentiful, both on the ground and hanging from the branches of trees which many Swedes have in their yards.

While police and the hunter failed to meet up with the prank-playing elk, they did eventually find the family’s swing set, propped up in a tree deep in the woods about 500 metres from their home.