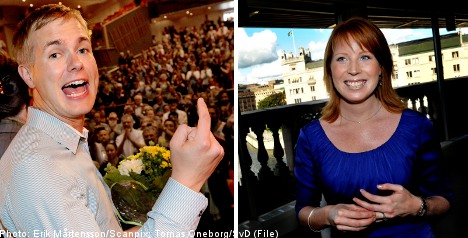 In less than two weeks, 28-year-old Annie Lööf is set to be voted in as the new head of Sweden’s Centre Party.

Lööf and Fridolin are just the latest under-30 politicians to rocket to the top in what some consider a worrying trend of youth trumping experience in the upper echelons of Swedish politics.

“Something has gone slightly wrong when Swedish papers claim that a 46-year-old party leader candidate has his age against him,” former leader of the Christian Democrats and current European MP, Alf Svensson, tells The Local.

Svensson’s comments refer to 46-year-old Left Party politician Jonas Sjöstedt who finds him battling 32-year-old Hans Linde to take over as party leader after Lars Ohly, 54, who announced early this year he plans to step down.

Svensson, who earlier this month wrote a scathing critique against the youth trend in Sweden’s politics on opinion website Newsmill, says that the recent choices of party heads shows that Sweden no longer values experience in their leaders.

“Party heads must be young and look good on TV. Jonas Sjöstedt, a very able left wing politician with a good amount of experience is told that his age – although he is still below 50 – will work against him. What a lot of tosh!”, wrote Svensson.

But a looking at the figures quickly reveals that Sweden’s top politicians are indeed getting younger.

But with Lööf, Fridolin, and 32-year-old Sweden Democrat head Jimmie Åkesson – who was only 25 when he took over the party’s top spot – this figure has fallen to just under 42.

“Among the considered candidates for the Centre Party leadership there were two people over 40. And in the Left Party leader election process, the situation is the same,” Modig wrote on Newsmill.

Modig also argues that it’s wrong to assume younger people have less experience. And politics shouldn’t be seen as a profession, but a commission of trust.

“There is nothing to say that these intellectual, driven and hungry people wish to be, or will be, full-time politicians in the long run. They might have other plans for their life and look at the time for party leadership as now,” he wrote.

Similar views have been argued by Lööf herself, who believes she was chosen as the Centre Party candidate, not because of her age, but because the party faithful trust her abilities.

“I think I can unite being a leader for a popular movement, with a leadership that works in the media,” she said in an interview with Sveriges Radio (SR) shortly after her nomination.

Lööf joined the party in 2001 and was elected to the Riksdag by preference vote in 2006, making her the youngest MP to serve during the 2006-2010 parliamentary term.

Despite her age, she has already held a number of prominent positions, including deputy leader of the Centre Party’s Riksdag group and the party’s economic spokesperson.

And Fridolin, who earlier this year was elected as spokesperson for the Greens together with older colleague Åsa Romson, 39, has a long CV for his relatively tender age.

Previously head of the party’s youth wing, Grön Ungdom, he served as a member of the Riksdag between 2002 and 2006, before leaving politics to work as a journalist and teacher.

After returning to politics in 2010, Fridolin served as an MP for Skåne and as the party’s industrial policy spokesperson.

While Svensson is convinced both Lööf and Fridolin are capable politicians, he argues they might even be even better representatives for their parties in 10 or 20 years.

“Of course it is vital to get young people into politics and perhaps politics could also benefit from a touch of the impatience that goes with youth, but I think it is dangerous to disregard the wisdom that experience brings with it,” Svensson explains.

Ironically, Svensson, now 72, took over as head of the Christian Democrats when he was only 34-years-old.

If anyone, he should know a thing or two about the benefits of maturity on the political scene, he argues

“I think that I was something of a spitfire which of course you ought to be in your 30s,” Svensson recalls.

“But I think that I could have benefited from taking a step back and listened more. With experience you’re able to see things from different angles.”

He thinks that the pendulum will eventually swing back towards an appreciation of experience over youthfulness, however.

“And I hope that it won’t backlash against young people in politics when it does,” he says.

The Left Party’s Sjöstedt, the politician whose age was said to be “against him” and who initially sparked Svensson to weigh in on the debate about youth versus experience, agrees that there is a trend toward younger leadership in Swedish politics today.

He argues that the preference for younger faces to front political parties is a refection of how parties strive to reinvent themselves and to attract new voters.

And youth is not a bad thing in itself, according to Sjöstedt.

“The most important ability is to be able to convey the political message of the party and to further party policy,” he explains.

“But there is a danger in appointing someone who lacks any other previous experience – who maybe hasn’t had a ‘regular’ job.”

Political scientist Nicholas Aylott of Södertörn University College, belives the trend toward a younger set of leaders may be a complete coincidence. And then again it may not.

“Both the Green and the Centre Parties did happen to have some rather talented young individuals among their ranks, but having said that, a similar trend does seem to be visible in other northern European countries, not in the least in Denmark and Finland, and even Britain,” Aylott explains.

Although not in his twenties any longer, the British prime minister David Cameron is, at 44, the youngest prime minister elected in almost 200 years in Britain. In addition, most of the country’s top brass are under 50.

One theory to explain the trend is that political parties and careers are changing, according to Aylott.

“It may be that it is easier today to make a rocket-like career within the political sphere – to get to the big posts quickly,” he explains.

And there are many benefits to having a youthful leader who makes a positive impression on voters.

“A young leader with a charismatic personality that looks good on the front of a magazine will reach a lot more people,” says Aylott.

“The biggest risk that springs to mind is making bad decisions. As you get older you gain in knowledge, credibility and perhaps an enhanced ability to make strategic decisions based on experience,” says Aylott.

Veteran politician Svensson also points out that there are times when experience counts for more than drive.

“If you are going in for an operation it may be calming to know that the surgeon has a few procedures under his belt,” he explains.

And Jonas Sjöstedt notes that youth hasn’t always been something to emphasise on one’s political CV.

”Former Left Party head C-H Hermansson recently told me that when he was elected at the age of 47 in 1964 he had been told his age was against him – that he was too young,” says Sjöstedt.

Despite this, Sjöstedt thinks that his age will definitely be a disadvantage for him when the Left Party goes to vote for their new head later this autumn.

Of course, Sjöstedt’s age isn’t the only thing working against him, as many within the Left Party would like a female leader.

“But as the typical politician traditionally has been a white middle-aged man, it fills me with hope for the future to be a member of a party where that will be seen as a disadvantage,” he concludes. 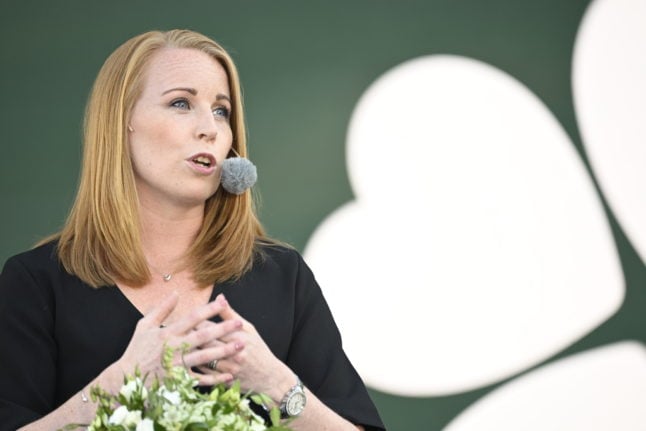 Lööf began her speech, which took place only five hours after Swedish psychiatrist Ing-Marie Wieselgren was stabbed to death, with a call for a minute’s silence.

“Let us be quiet for a moment and take in what has happened,” she said.

Then, the minute’s silence over, she began.

“This evening, Almedalen is not a place for political gimmicks, conflicts and harsh words,” she said. “Today it is a place for coming together and reflection.”

Politically, the speech was interesting in that it strongly emphasised her party’s support for issues such as refugees, foreign aid, climate change, LGBT rights, a support for Ukraine, but did not even mention the liberal economic reforms the party had managed to drive through with the January Agreement with the government, with tax cuts for the very richest, and liberalisation of Sweden’s first-in, last-out employment rules.

At the same time she placed her party firmly between the left-wing and right-wing bloc in Swedish politics, telling the leaders of both the Moderate Party and the Social Democrats that they could have her support.

“Ulf Kristersson,” she said. “If you want to have the Centre Party’s support to be prime minister, let go of the Sweden Democrats. Come back to the successful liberal politics which created the Alliance and meant that we were in power together for eight years.”

“Magdalena Andersson,” she continued. “If you want to have the Centre Party’s support as prime minister, let go of left-wing politics. Build the next mandate period on a new social liberal reform agenda on which we build on the best of the January Agreement.”

On Twitter, Jonas Hinnfors, a politics professor at Gothenburg University, pointed out that Lööf had not demanded that Andersson “drop the Left Party”, but only “Left-wing politics” (unlike what she said about the Sweden Democrats).

And when she discussed the Sweden Democrats, Lööf’s rhetoric was tougher than that employed by any other party leader in their Almedalen speech.

“Sweden is not Hungary, Sweden is not Italy, Sweden is not Poland. There’s no reason for a Swedish government to make itself dependent on an authoritarian, xenophobic party,” she said. “If only the will can be found, it’s possible to win support for taking power in Sweden among responsible, sensible parties. It’s been done before.”

On energy, she rejected the attempt on Sweden’s right-wing to present nuclear power as the solution.

“Stop putting team wind and team nuclear against one another,” she said. “We need more of every time of emissions-free energy. Double Swedish electricity production, because that will make the difference, for people and companies, in the cities and in the countryside.”

She also called for a “new Marshall plan for Ukraine”. “Replace every demolished school, every playground, every bombed home. Build new roads and railways, hospitals and theatres. Build bridges, not just for cars and trains, but for a brighter future as part of the EU.”

She ended a her speech with a series of call outs to anti-racists, feminists, LGBT activists, and people worried about the environment.

“To all of us who are hankering after a greener, freer, and stronger Sweden ahead of us,” she said. “Our time is now.”

You can read Lööf’s full speech here in Sweden and in English (Google translate) here. 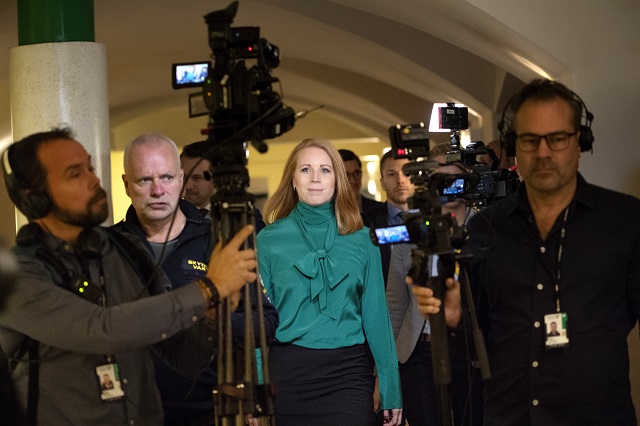