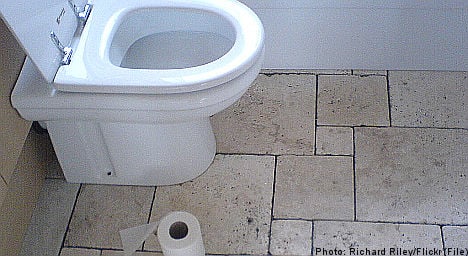 The officer swung off the E4 motorway to grab a bite for lunch at Ikea’s flagship Kungens Kurva store in south-western Stockholm.

After enjoying her meal, the officer visited the restaurant toilet before leaving the furniture store and continuing her day.

When she arrived at the police station a couple of hours later, she discovered that her service pistol was missing.

She soon recalled that she had placed her weapon on the waste-paper basket in an Ikea toilet.

A representative from the local police department proceeded to ring up the Ikea store and was told that the gun had been handed into the lost and found and was available for collection.

“Yes, we have a pistol here,” Stockholm police were told by Ikea staff, according to a report in the Metro daily.

The forgetful officer has reported the matter to her superiours and an internal investigation into the her conduct has been launched.

The officer explained that in order to remember her pistol she usually leaves it on the sink but as the simple toiler cubicle lacked one, she was obliged to place it on the waste-paper basket.

Depending on the findings of the internal police investigation, the officer may risks receiving a warning and a possible dock in pay.