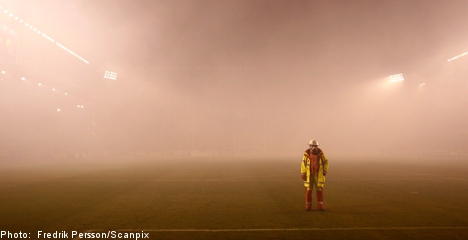 For ten long minutes Råsunda football stadium in Solna held an eerie silence as the over 24,000 paying spectators from the bitter rival clubs sought to demonstrate the massive contribution fans make to football.

AIK’s supporters club Black Army explained the reasons behind the protest in a comment on their website:

“The stands will be quiet in order to demonstrate the importance of a vibrant and positive terrace culture and to protest against those who want to hurt football and its audience.”

The Black Army identified a list of perceived threats to the game including “collective punishment” and “policy decisions which threaten the rule of law” which they argued displayed an “unacceptable attitude to Swedish supporters”.

The media are furthermore blamed for “distasteful headlines” and “general hunting of fans” and argued that Swedish football is threatened if “the footballing public continues to be seen as a problem instead of an asset”.

Once the ten minutes were up the match reverted to the cacophony of sound and chanting that is expected of a derby between clubs at opposite ends of the Allsvenskan table as the closing stages of the season approach.

The first half took an unexpected turn as Kennedy Igboananike scored in the 20th minute to give Djurgården the lead.

After the half-time break supporters from both teams showed a less savoury side of “terrace culture” in Swedish football when they lit a slew of firecrackers and flares, forcing the referee to interrupt the match and pull the teams off the pitch.

The players remained in the changing-rooms for some seven minutes before resuming a hard fought battle that produced no further goals and left AIK’s hopes of winning the championship effectively in tatters.

For Djurgården the win was a huge step towards securing their top flight status for a further season and with fellow Stockholm club Hammarby languishing at the bottom of Swedish football’s second tier, ensuring a Stockholm derby in 2012.

Stockholm police reported that almost 90 supporters were detained in connection with the match with two arrested for aggravated assault.