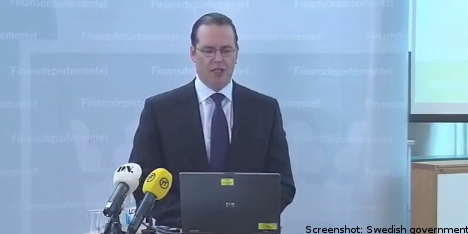 In 2013 GDP is expected to grow by 3.5 percent, the government forecast in its detailed budget financial plan.

“The ministry of finance estimates that the Swedish economy will slacken considerably in 2012,” it said in a statement as Finance Minister Anders Borg presented the proposed budget to parliament.

“In the budget bill for 2012, the government gives priority to measures to address the slowdown, achieve sustainably higher growth and employment, ensure that everyone shares in welfare and increase the stability of the financial system.”

The Government believes that most of its reform ambitions can be carried out and expects to be able to push through a fifth step in-work income tax credit, reduced taxes for seniors, an raised threshold for state income tax and a continued improvement of the conditions for business.

Just as in prime minister Fredrik Reinfeldt’s statement at the opening of parliament, the theme of “responsibility” remained the keyword in the financial plan.

“More restrictive scope for reform in the wake of worsening public finances and the increased need for safety margins constitute a time for accountability,” the plan reads.

While the GDP forecast has been revised down substantially, the government warns that there is a risk of an even weaker development.

The government had in April forecast a surplus of 65 billion kronor for 2012, but the global economic slowdown was seen wiping out that surplus and Borg now predicted a balanced budget.

With “scope for reform” now set at 15 billion kronor ($2.2 billion) for 2012, the government expects savings to come in close to nothing, but advises that margins allow for jobs policy initiatives “if the development would be worse”.

In its draft budget, the government has proposed a labour market package of 8.1 billion for 2012-2014.

Sweden’s Public Employment Service (Arbetsförmedlingen) is set to receive an extra 1.2 billion kronor next year. Overall, the number of temporary employment and training places will increase by 15,350 next year and 8,550 in 2013, according to budget proposals.

Many of the proposals have been presented earlier, such as lowered restaurant tax, infrastructure projects and assistance to households with the lowest incomes in particular in the form of increased housing benefits.

Unemployment is expected to reach 7.5 percent this year, 7.8 percent in 2012 and 7.7 percent in 2013, according to the financial plan. Compared with the treasury department’s assessment on August 26th, the forecasts are unchanged.

The surplus in public finances is expected to be wiped out next year. General government net lending is expected, as a percentage of GDP, amounting to 0.1 percent this year, 0.0 percent in 2012 and 0.7 percent 2013.

The costliest measure is a cut in the value-added tax (VAT) on restaurant services, from 25 to 12 percent, “to create jobs for young people and stimulate entrepreneurship.”

Unions said they were not convinced.

“We want stronger measures for the labour market and more incentives for companies to create new jobs,” said Carin Wallenthin of blue-collar union IF Metall.

The budget bill also forecast an increase of some 100-million-kronor for the operations of Sweden’s intelligence agency Säpo following the suicide bombing in Sweden in December and twin attacks in neighbouring Norway in July, to 1.04 billion kronor.