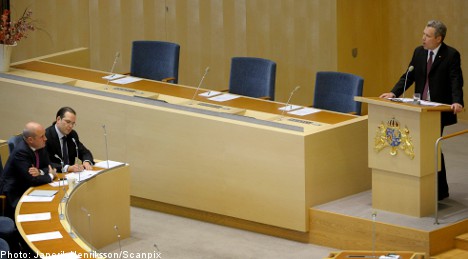 Social Democrat economic policy spokesperson Tommy Waidelich accused the government of including too optimistic calculations for Sweden’s economic prospects in 2013 and 2014, the next time Swedish voters head to the polls.

“This budget isn’t based on reality, it’s built on the rosiest calculations and unrealistic expectations,” he said.

“We’ve been hearing about a debt crisis for weeks; now there is a dip, down in 2012, up in 2013, but there is no talk about why. The only measure on the table is a having of restaurant sales tax.”

Borg countered with warnings of a Social Democratic “tax hike bomb”, pointing out that recent proposals discussed by the Social Democrats, saying he looked forward to hearing more about how they would be financed when the party releases its shadow budget in two weeks.

“That’s when they’ll come, all these taxes and spending we can handle,” said Borg.

“The Social Democrats are presenting a tax hike bomb.”

Liberal Party (Folkpartiet) economic policy spokesperson Carl B. Hamilton supported Borg’s case, warning for a “forceful expansion in spending” on the part of the Social Democrats.

He also criticised the Social Democrats for a lack of focus in their measures.

“You’re spreading money like fertiliser over the whole country and toward every possible end,” said Hamilton.

Borg kicked off the debate by emphasising the fragile state of the economy, explaining that, while Sweden stands strong, it hasn’t been unaffected.

“In situations like this, you don’t take chances, you build protective dikes,” he said.

According to Borg, the budget rests on four legs, in addition to protective measures, the package also includes temporary stimulus spending, a long-term growth policy, and the safeguarding of social cohesion.

Nevertheless, Waidelich said it was the wrong time for Sweden to cut the vaule added tax (VAT paid by restaurants).

Johnny Skalin of the Sweden Democrats extended a hand to Waidelich on the restaurant sales tax issue, as well as indicating his party was willing to cooperate on reducing taxes for pensioners.

Skalin urged the Social Democrats to convince the Green Party to join them in a common front.

“The money could be transferred to pensioners right away,” he said.

The restaurant sales tax reduction was a popular punching bag for the opposition parties. The Left Party accused the government of slinking away from its responsibilities on the issue of employment.

“Instead of billions for lower restaurant sales tax, the money should be devoted to jobs and welfare,” Left Party economic policy spokesperson Ulla Andersson said in a statement.

Instead, the Left Party wants to spend the estimated 5.4 billion kronor ($808 million) the government has devoted to lowering restaurant sales tax to helping ease the generational shift among workers in the elderly care sector, a measure the Left argues would create 25,000 jobs.

Per Bolund of the Green Party charged that the government had a “visionless budget”.

He also criticised the government for not being ready to use any new environmental taxes.