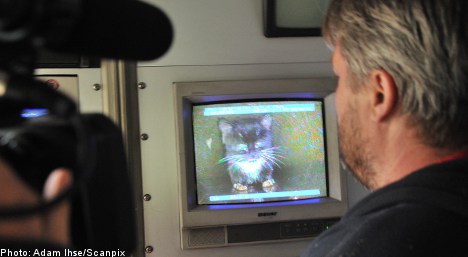 “It scratched me when I lifted it, so it is feeling okay,” said Christopher Bidestedt, who was the one who finally secured the cat’s release from its tight spot.

“We will take it to the vet, then I’ll take care of it until we find an owner for it,” he said.

According to Bidestedt he had been instructed to rescue the cat as long as there was evidence that it was still alive.

“If we had seen that it was lifeless, we would have flushed the pipe with a high pressure sprayer. But thankfully we did not have to do that,” he said.

The kitten managed to get itself stuck in a drainage pipe at Brunnsbotorget on Hisingen in Gothenburg.

The cat’s constant meowing was heard by staff at one of the supermarkets on the square, who then proceeded to alert the property owner. It was at first thought that the noise was coming from a wall.

With the help of cameras, it was possible to locate the cat in a pipe, which measured just over 15 centimetres in diameter.

The rescue work was followed by a large media interest and the work was directed by technicians on a nearby bus, which had been used to monitor the cat on video.

“There are so many people who call all the time. But we are working hard to get the cat out,” said Anders Rydholm at property firm Göteborgslokaler, who was responsible for the rescue efforts.

The cat had probably fallen down in the approximately one and a half metre deep well, when the cover was removed, and then crawled into the pipe.