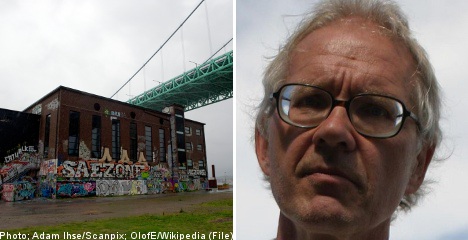 The Swedish prosecutor’s office refused to comment on the report.

Vilks has meanwhile decided to cancel his participation in a debate on Friday at the Gothenburg Book Fair due to the security risks involved.

“The debate will be held but the security situation dictates that it wouldn’t have been were I to be present,” Vilks said.

The artist, who has faced numerous death threats and a suspected assassination plot after publishing a caricature depicting the Prophet Muhammad as a dog in 2007, was coy about whether he would be attending the book fair at all.

“If I do I am not going to talk about it. I’ll have to sneak in in costume, so if you see a bearded man with black glasses on, then….”

One of the suspects had bought a pocketknife to be used in the attack, and

one of the men had asked for Vilks at the art fair, according to Metro.

Adel Kulan was later released due to lack of evidence and the suspicions against the other men were downgraded from preparing terror crimes to preparing to commit murder.

They remain in custody.

The arrests led to an evacuation of the Röda Sten art gallery, while Vilks himself was in Stockholm at the time.

After decades focused on Islamist extremism, the United States has increasingly identified a threat from the far right, classifying in 2020 the Russian Imperial Movement as a terrorist organization, the first such action against a white supremacist group.

The State Department on Wednesday designated as a terrorist Anton Thulin, a Swede who allegedly traveled to Saint Petersburg for paramilitary instruction by the Russian group.

Thulin, who was formerly active in the Nordic Resistance Movement, was sentenced to prison in 2017 for setting off a bomb near a refugee center in Sweden. After his release, he was expelled by Poland, where authorities said he was seeking further training.

“An element of it entails violent white supremacists traveling internationally to train and fight with likeminded individuals.”

The Treasury Department also blocked any US assets and criminalized financial transactions with two members of the Russian Imperial Movement, identified as Stanislav Shevchuk and Alexander Zhuchkovsky.

Shevchuk has traveled to the United States and Europe to unite far-right extremists, while Zhuchkovsky has used social media and online payment systems to buy military supplies for Russian troops in Ukraine, the Treasury Department said.

The Russian group denounced the US terrorist designation in 2020, insisting that it was only helping volunteers fighting on behalf of pro-Russian separatists in Ukraine.

Canada earlier this year followed suit by banning the Russian Imperial Movement as a terrorist organization along with the Proud Boys, a far-right group involved in the January 6, 2021, attack on the US Capitol.