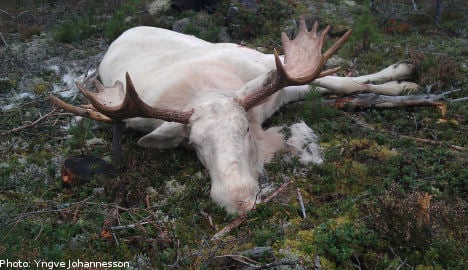 ”We have encountered white elk before but never one this huge. It is the size of the antlers that makes it so spectacular,” Broberg told The Local.

According to Broberg it was his brother who first spotted the white elk at a distance of about 400 metres.

The tracking skills of the pair’s hunting dog, Nymeråsens Argo, were also praised in helping bring down the mighty beast.

”My brother called on the radio that a white elk was on its way down my way. All of a sudden it appeared about 40-50 metres away, and I took my shot,” Broberg said.

The shot hit the animal in the lung, close to the heart. After it fell, the members of the Djäkneliden’s hunting party gathered around the animal.

Weighing in at nearly 300 kilos, the unique albino male elk is believed to have been about 4 years of age. Its crown had 15 points.

The first time an albino elk was spotted in Sweden was in the 1930s and the animal is fairly uncommon in Sweden.

However, its numbers are currently growing in the county of Värmland, very much because it has been under protection from hunting parties in many other areas.

”We estimate that there are 50-100 white elk in the county out of a total of 20,000 animals,” said Gunnar Glöerson, game manager from the Swedish Hunters’ Association (Jägareförbundet), to newspaper Expressen.

According to Glöersen, the hunt doesn’t endanger the white strain, but its existence has been debated since it was first spotted.

”Many think that white elk should be preserved because they are different, others say they are freaks of nature,” Glöersen said to the paper.

The huge white elk caused quite a commotion when its carcass arrived at the local slaughter house.

”It is a unique animal and there was a great joy just to see it. At least 50 locals turned up at the slaughter house to take a look at it,” Broberg told The Local.