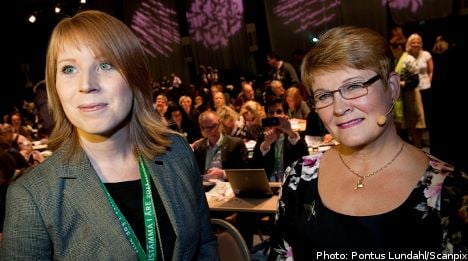 In her speech Olofsson challenged her successor Annie Lööf to stand up for the party’s values, the importance of an open society, of more entrepreneurs and that the individual must take centre stage.

At the same time Olofsson suggested that Lööf must show a willingness to compromise. Olofsson was unable to hold back the tears as she took to the podium and proceeded to dedicat a large part of her speech to her proudest achievements.

“There are those who like to call me Mother Alliance and I say, that I am,” Olofsson said, in reference to the government coalition that she did much to form.

The party will now undergo a period of renewal with a new leader and some changes in other key positions. Olofsson underlined that she has nothing against continuing in her role as enterprise minister.

“It is fun to be enterprise minister, but I can also live without it,” she said and pointed out that new party leader Annie Lööf is the one to decide.

Lööf has said that she has not yet started to consider ministerial posts.

“Firstly I should be elected, it is then the new party chairperson’s role to put together her new team in the government. I am going to begin my deliberations during next week, but during the autumn I will present a new team,” Lööf said.

Among the names under consideration for ministerial posts are Annie Lööf herself, who is expected to replace Andreas Carlgren as environment minister, and MEP Lena Ek who has been named as a possible new enterprise minister.

Annie Lööf will be elected as new party leader on Friday and will on Saturday hold her inaugural speech.