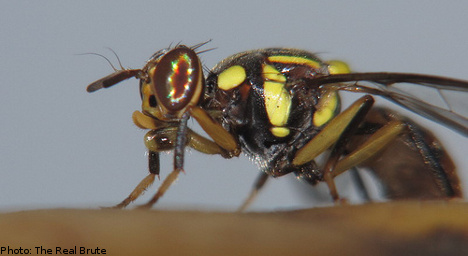 The frenzied wasp attack occurred at around 10am on Friday, while the children at Solstenen preschool in Norrköping were playing in the nearby woods, according to a report in the local Norrköpings Tidning daily.

“The children came back and they were very upset,” said Gunilla Wahlberg at the preschool to the newspaper.

The facts soon emerged that in fact five people had been stung by the common wasps, leaving them swollen and feeling ill. It is reported that several felt close to fainting.

The whole episode was described as “shocking” for the children, some as young as two-years-old.

“They brought in all the children and rang the ambulance at once,” Wahlberg said, reserving praise for the conduct of her staff.

Five of the party were taken by ambulance to Vrinnevis hospital in the town, where it was concluded that the three children had sustained minor injuries in the wasp attack.

As a result of the harrowing ordeal, staff will exercise caution before venturing out to the woods, a popular spot for the preschool children.

“Had we known that there was a wasp’s nest there we would never have gone. But according to (pest control firm) Anticimex an animal had probably been in there poking about during the night and disturbed the wasp’s nest.”