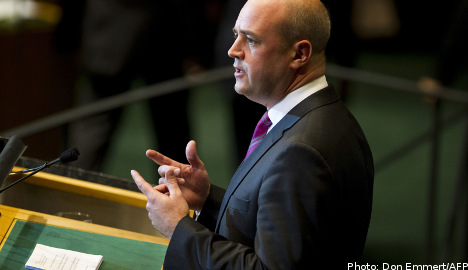 In Reinfeldt’s speech to the UN’s general assembly, he pointed out many places worldwide where progress has been made, but also described the lack of gender equality around the globe as “possibly the greatest failure of human rights.”

“It’s about giving all individuals the same possibilities, regardless of their sex,” he said.

Reinfeldt discussed the way belief in democracy and freedom are spreading around the world, at the same time as repressive regimes continue to strike against dissidents.

“In many countries, including my own, freedom is taken for granted. In other countries it is still a dream,” Reinfeldt said.

Using Syria as an example, the prime minister stated that the rest of the world has a responsibility to protect civilians.

Reinfeldt also said that a powerful UN is important, and something Sweden strives for, partly by hoping to win a place on the UN human rights council.

The prime minister concluded his speech with a quote from the Swedish former UN secretary general, Dag Hammarskjöld.

“The quest for peace and progress – with its trials and errors, its attempts and setbacks – must never be dropped and never abandoned.”

The opposition had no objections to Reinfeldt’s priorities, which had been made public ahead of time, but accused the prime minister of empty words.

“It’s a little unexpected for Reinfeldt to focus on gender equality. But unfortunately this is rhetoric that lacks coverage,” he said.

The Green Party’s Valter Mutt thought the speech would have been more credible if Reinfeldt’s words had been reflected in the government’s aid policy.