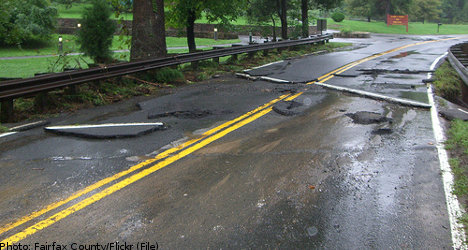 “We are catching up with the preventative measures,” said crisis management leader Per-Mats Öberg to the TT news agency on Saturday afternoon.

Although the weather has been improving slightly, the roads are still at risk of being undermined as the water begins to retreat, emergency services said on Saturday morning.

A total of six roads were cordoned off in Norrbotten, in northern Sweden, on Saturday morning. Some were flooded, and others destroyed by the masses of water. By the afternoon, one had been opened for traffic again.

The closed roads are in the municipalities Piteå, Älvsbyn and Boden.

“The weather is looking stable, and the rains have stopped, but the danger isn’t over. Drive with utmost care on roads near rivers,” said Öberg.

He emphasized that roads which look perfect may still have been undermined by the masses of water.

“At worst, it could be nothing more than the layer of asphalt holding the road together,” he said.

The broken roads are being repaired, and preventative work has commenced to avoid any further destruction of roads. On certain stretches of road gravel is also being deposited to raise the embankments.

Per-Mats Öberg asks everyone planning to drive in the area to check the Swedish Transport Administration’s (Trafikverket) website for information on the status of the roads.